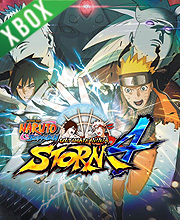 It's a digital key that allows you to download Naruto Shippuden Ultimate Ninja Storm 4 directly to Xbox One from Xbox Live.

How can I find the best prices for Naruto Shippuden Ultimate Ninja Storm 4 on Xbox one?

Take advantage of the totally revamped battle system and prepare to dive into the most epic fights you’ve ever seen in the NARUTO SHIPPUDEN: Ultimate Ninja STORM series!

The swan song of Naruto: Ultimate Ninja Storm 4 couldn’t be louder with this fantastic release that improves upon so much from previous titles.

Bandai Namco and CyberConnect2 have done some amazing work here, and everyone who’s a fan of the show needs to play this game.

Stunning to behold and hugely enjoyable to play, Naruto Shippuden: Ultimate Ninja Storm 4 can sometimes prove frustrating, but once you get to grips with it and master its combat, enjoying the blistering battles that ensue is a joy.