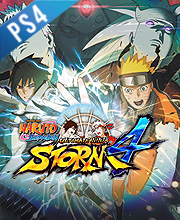 It's a digital key that allows you to download Naruto Shippuden Ultimate Ninja Storm 4 directly to Playstation 4 from PSN (Playstation network).

Take advantage of the totally revamped battle system and prepare to dive into the most epic fights you’ve ever seen in the NARUTO SHIPPUDEN: Ultimate Ninja STORM series!

Whether you’ve been playing the series since it began, or this is your first entry in the series. I think Naruto Shippuden: Ultimate Ninja Storm 4 is certainly worth your time.

A phenomenal fighting game that offers lots of different modes to keep you busy, but one with an abundance of cutscenes and narrative throughout, which might not be everyone’s cup of tea.

Easily the best looking anime fighter on the market today, the fourth and final entry in the Naruto Shippuden: Ultimate Ninja Storm series proves to be a highly entertaining one as it parallels its stupendous presentation with substantial longevity and an easily accessible brawler.