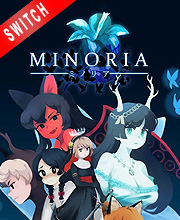 It's a digital key that allows you to download Minoria directly to Nintendo Switch directly from Nintendo eShop.

How can I find the best prices for Minoria on Nintendo Switch ?

It’s not quite as feature-rich as some of the other titles in the genre and will only last roughly 5 hours or so, but the combat is so impressive, that we’d urge you to check it out.

Minoria is quite competent and will likely appeal to fans of the genre, in particular those who enjoyed its predecessor, Momodora.

Zoom 1m 3m 1y All
Track product
NINTENDO CODE : This is a digital code for Minoria. Use the download code on the Nintendo eShop of your Console. Once connected to the Nintendo eShop, you can enter and redeem the Download Code. Read carefully the store description about any language and region restrictions.
Standard Edition
Compare Choose & Buy Download (772)