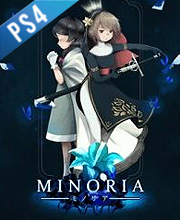 It's a digital key that allows you to download Minoria directly to Playstation 4 from PSN (Playstation network).

Minoria brings an excellent action game to consoles. It plays it safe with its Metroidvania design, but it excels when it comes to immersive world-building and environmental layout. There’s so much to discover here, but expect to die many times doing so. Thankfully, there’s an evolving and competent battle system to rely on.

Minoria is a good Castlevania game with some difficulty spikes that may trouble some. It’s generally a great experience. Burn the witch!