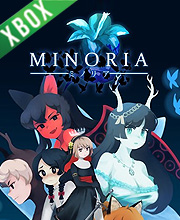 It's a digital key that allows you to download Minoria directly to Xbox One from Xbox Live.

How can I find the best prices for Minoria on Xbox one?

Minoria on Xbox One is a worthy entry in the broader Momodora canon. While Momodora: Reverie Under the Moonlight is arguably the more memorable experience, Minoria is still a welcome and unique take on the developer’s own Metroidvania formula; one that manages to do things with its own style both in presentation and gameplay.

In the end, I found Minoria to be a muddled experience. Without the beautiful pixel art to paint over its flaws, this new work has lost much of its charm — and worse, it’s made me reassess my enjoyment of its predecessors.

Zoom 1m 3m 1y All
Track product
XBOX ONE GAME CODE : Use the Digital Code received by mail in your Xbox One account to download Minoria from the Xbox Live. Internet connection is required. Please read the store description about any language or region restrictions.
Standard Edition
Compare Choose & Buy Download (759)