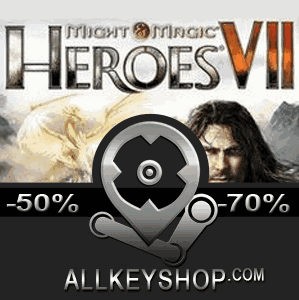 It's a digital key that allows you to download Might & Magic Heroes 7 directly to PC from the official Platforms.

How can I find the best prices for Might & Magic Heroes 7 CD keys?

Allkeyshop.com compares the cheapest prices of Might & Magic Heroes 7 on the digital downloads market to find the best sales and discount codes on trusted stores.

As with the other games in the series, you will control heroes – leaders with magical abilities who will recruit various forces from strongholds, develop and manage their economy, and lead armies and legendary creatures to battle.

The game’s objective is to have the heroes and their armies battle opponents who also have their own hero and their own forces. The game features a series of campaigns as well as single player and multiplayer scenarios.

The story of Heroes 7 takes place during a war of succession in an enchanted world called Ashan. With the Empress’ murder leaving the realm in chaos, and rivals stealing the throne, Duke Ivan calls for 6 trusted advisors to form a prestigious council to restore order and end the conflict.

Take on the challenge and be the hero you want to be with Might and Magic Heroes 7!

First offer from Eneba for 4.07 is actually for Heroes 6
What is it doing here ?

Ok i have checked and taken the necessary actions. Thanks for reporting it.

this game is really cool. Would love to have it. Thanks to allkeyshop that soon will be possible!

Best Heroes since Heroes III; thanks for this game I was waiting for something like that for too many years. Probably the graphics and animation could be better but I don’t really care because the great gameplay makes suplies its weak points.

good game , lots of store and options and cdkey compare to buy from, really enjoyable