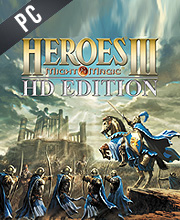 What is Heroes of Might & Magic 3 HD Edition CD key?

It's a digital key that allows you to download Heroes of Might & Magic 3 HD Edition directly to PC from the official Platforms.

How can I find the best prices for Heroes of Might & Magic 3 HD Edition CD keys?

Allkeyshop.com compares the cheapest prices of Heroes of Might & Magic 3 HD Edition on the digital downloads market to find the best sales and discount codes on trusted stores.

Heroes of Might & Magic 3 HD Edition (HOMM III HD) is a role-playing game based on the original 1999 game: The Restoration of Erathia. The game is developed by DotEmu and published by Ubisoft Entertainment.

This is mostly like the original HOMM III only revamped. With a facelift to satisfy modern tastes for high-resolution graphics, the gameplay is basically identical: You take on the role of fantasy heroes in campaigns, some fifty individual settings, and a few local and online multiplayer modes. Accomplishments are divided between the three modes: exploring, building cities, and engaging in combat. While exploring, there are a number of items you can get, which includes resource pits, treasure piles, magical artifacts.

During combat armies are led by heroes that level up and gain skills. Battles are turn-based taking place on hex maps, either out in the open or in sieges before city walls. A balance between melee and range units is essential when building armies. Lastly, you need to spend time conquering and then constructing towns specific to each faction. It is a crucial part of winning the game because conquest makes you have access to new cities that gives you higher production levels and helps you create various types of troops.