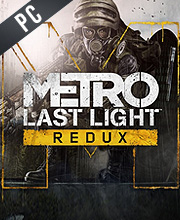 It's a digital key that allows you to download Metro Last Light Redux directly to PC from the official Platforms.

How can I find the best prices for Metro Last Light Redux CD keys?

Allkeyshop.com compares the cheapest prices of Metro Last Light Redux on the digital downloads market to find the best sales and discount codes on trusted stores.

Metro Last Light Redux, the follow up to 2010’s Metro 2033, is a single-player first-person shooter game developed by Ukrainian studio 4A Games and published by Deep Silver.

Players are put in a role of a nuclear holocaust survivor named Artyom who lives in subway tunnels underneath Moscow. Players can choose from a variety of firearms both fictional and realistic type of weapons. Rather than the traditional health point system, the game features recharging health.

Health will slowly restore if the player has not taken damage for a period of time. Ammunition is an essential commodity in this post-apocalyptic environment. This makes scavenging a crucial aspect of the gameplay.

Ammos can be used as currency to purchase higher grade weapons and other items. Last light gives players a glimpse into his rugged life with a story surrounding fascinating settings. The game added survival horror elements which includes paranormal phenomena, hallucinations, and noises. The player has to rely on a rechargeable flashlight as well as night vision goggles in order to go through dark hallways and passages.

A beautiful game with plenty of content. The creature encounters in this game are amazing.

hmmmmmmmmmmmmmm metro last light is improved versin of M 2033 but it not that great as the the first one. i do recommend this game leave a reply if agree

Thank you very much for this game . The story takes place in post-apocalyptic Moscow, mostly inside the metro system, but occasionally missions bring the player above-ground .

I can’t wait to see metro: last light and 2033 redefined andvisually better, this bundle is also half price for those who already own this 2 games