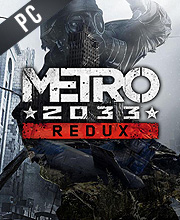 It's a digital key that allows you to download Metro 2033 Redux directly to PC from the official Platforms.

How can I find the best prices for Metro 2033 Redux CD keys?

Allkeyshop.com compares the cheapest prices of Metro 2033 Redux on the digital downloads market to find the best sales and discount codes on trusted stores.

Metro 2033 Redux is a survival horror post-apocalyptic first-person shooter video game, based on the novel Metro 2033 by Russian author Dmitry Glukhovsky. Metro 2033 Redux was developed by 4A Games and was released on August 27,2014.

We  thought this Redux edition was only a graphical enhancement to the game released back in 2010, but we were dead wrong, this game is totally on another level. Make no mistake, the creators have done a superb job! Redux sports better lighting effects, more detailed textures and has so many bits and pieces put together to make a totally new gaming experience.

The game takes place in 2013, the world was devastated by an apocalyptic event, annihilating almost all mankind and turning the Earth’s surface into a poisonous wasteland. A handful of survivors took shelter in the depths of the Moscow underground, and human civilization entered a new Dark Age. Your actions will determine the fate of mankind. But are you ready take on such a huge responsibility?

Metro 2033 has been revamped in the greatly improved Metro Last Light engine and gameplay framework, to create the definitive version of the cult classic that fans and newcomers alike can enjoy. Whether you have played the original or not, this is a game for anyone seeking an awesome atmosphere, story, and FPS gameplay blended into something amazing. Do not miss this post-apocalyptic experience!

Zoom 1m 3m 1y All
Track product
EPIC GAMES KEY : Region Free / Worldwide. Requires Epic Games Launcher App in order to play the game. You need to create a free account here in order to download Metro 2033 Redux from Epic Plateform . Read the description on the store page about any language or country restrictions.
GOG.COM CD KEY : You need to register on Gog.com, then use the GOG Key to download and activate your game to play Metro 2033 Redux.
EU STEAM CD KEY: Requires an EUROPEAN IP address or you must activate it with a VPN (Virtual Private Network) in order to play Metro 2033 Redux. Might have languages restrictions or language packs. Read the description on the store game page to know if the EU IP is only needed for activation or for playing also (maybe on EU Servers). Most of the stores offer you their help, or show you how to do this with a tutorial to follow.
STEAM GIFT : A Steam gift is a one-time transfer you receive. You activate and install Metro 2033 Redux to play on Steam, it is a non-refundable game that stays in your Steam games collection. Please read the store description about any language or region restrictions.
STEAM CD KEY : Use the Steam Key Code on Steam Platform to download and play Metro 2033 Redux. You must login to your Steam Account or create one for free. Download the (Steam Client HERE). Then once you login, click Add a Game (located in the bottom Left corner) -> Activate a Product on Steam. There type in your CD Key and the game will be activated and added to your Steam account game library.
Windows 10 Global : This is an Worldwide Microsoft code to play on PC for Worldwide . You need to have installed Windows 10 Anniversary Edition update on your PC. Log into your Microsoft account to download and play. Read closely the description given by the store to activate your game.
Bundle
Franchise Pack
Standard Edition
Compare Choose & Buy Download (772)

A great game with fine graphics, with a captivating story.
The gameplay is fun, with an atmosphere that gives you the impression that someone is behind you and shooting is fun.

Best horror game what i have played… even the forest wasn’t full of horror like this. Those sneaking….. creatures… great game ! Try it.