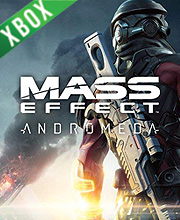 It's a digital key that allows you to download Mass Effect Andromeda directly to Xbox One from Xbox Live.

How can I find the best prices for Mass Effect Andromeda on Xbox one?

Allkeyshop.com compares the cheapest prices of Mass Effect Andromeda on the digital downloads market to find the best sales and discount codes on trusted stores.

Mass Effect: Andromeda is an action role-playing game that was developed by BioWare and later published by Electronic Arts for the Xbox One. The gameplay takes place in the Andromeda Galaxy during the 29th century, where humans have devised a plan to strategically populate new homeworlds. This unified goal is generally recognized as the Andromeda Initiative. In the game, you get to play as one of two protagonists, Scott or Sara Ryder. The said protagonists are experienced military recruits whose interests are aligned with that of the Andromeda Initiative. As Ryder, your goal is to become humanity’s Pathfinder; the person responsible for finding a new homeworld for humanity. However, you must remain vigilant and cautious as there resides an antagonistic alien race known as the Kett. You are guaranteed to have a blast as you will be exploring the vast open words, much bigger and more interactive than those of previous installments in Mass Effect series. Mass Effect: Andromeda maintains much of the core concepts of Mass Effect games while improving upon existing features like combat which is now less “cover-based” and a lot more mobile. According to the developer, the game has also been made much lighter and inviting. Consequently, it is the largest game in the series and the most ambitious of the lot. Mass Effect: Andromeda is a predominantly single-player game but it does also feature a multiplayer mode that revolves around horde-style cooperative matches.

Prove you have what it takes to be humanity’s Pathfinder but be mindful that the fate of the entire race is in your hand.

Good game overall. Not like previous editions, but good and fun to play.

One of the best games i’ve ever played, good graphics.

One of the best mass effects.Huge fan of the series !!!!

One of the best games I’ve played!I’m a huge fan of the Mass Effect serie, can’t wait for this new episode!!