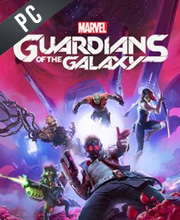 What is Marvel’s Guardians of the Galaxy CD key?

It's a digital key that allows you to download Marvel’s Guardians of the Galaxy directly to PC from the official Platforms.

How can I find the best prices for Marvel’s Guardians of the Galaxy CD keys?

Allkeyshop.com compares the cheapest prices of Marvel’s Guardians of the Galaxy on the digital downloads market to find the best sales and discount codes on trusted stores.

Marvels Guardian of the Galaxy is an action-adventure game set in the world-famous marvel universe, featuring a new original story and a new cast of characters playing the Guardians of the Galaxy, In the game, you play as Star-Lord the leader of this band of misfits the other members are as follows Drax the destroyer, Rocket Racoon, Groot, and Gamora. Lead your team through a tumultuous time for your team when Star-lord sets off a catastrophic chain reaction that could lead to interplanetary devastation. 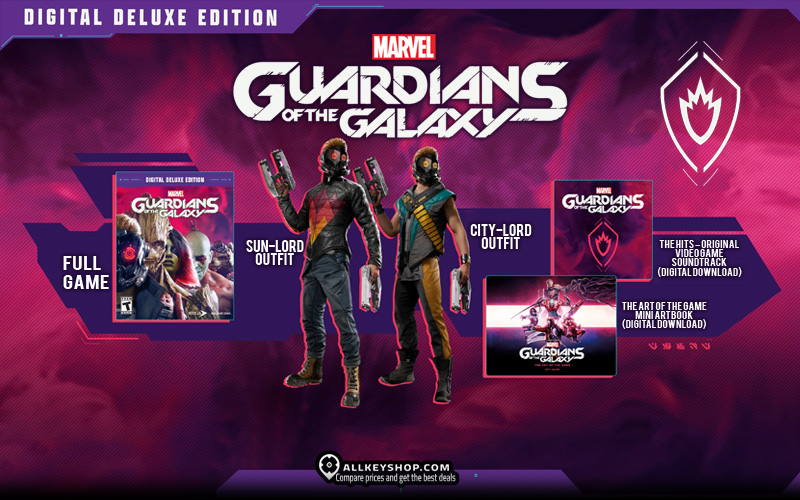 Don’t know which edition to choose? Here’s a guide to help you decide: Marvel’s Guardians of the Galaxy – Which Edition to Choose

EPIC GAMES KEY : Region Free / Worldwide. Requires Epic Games Launcher App in order to play the game. You need to create a free account here in order to download Marvel’s Guardians of the Galaxy from Epic Plateform . Read the description on the store page about any language or country restrictions.
EU STEAM CD KEY: Requires an EUROPEAN IP address or you must activate it with a VPN (Virtual Private Network) in order to play Marvel’s Guardians of the Galaxy. Might have languages restrictions or language packs. Read the description on the store game page to know if the EU IP is only needed for activation or for playing also (maybe on EU Servers). Most of the stores offer you their help, or show you how to do this with a tutorial to follow.
STEAM GIFT : A Steam gift is a one-time transfer you receive. You activate and install Marvel’s Guardians of the Galaxy to play on Steam, it is a non-refundable game that stays in your Steam games collection. Please read the store description about any language or region restrictions.
STEAM CD KEY : Use the Steam Key Code on Steam Platform to download and play Marvel’s Guardians of the Galaxy. You must login to your Steam Account or create one for free. Download the (Steam Client HERE). Then once you login, click Add a Game (located in the bottom Left corner) -> Activate a Product on Steam. There type in your CD Key and the game will be activated and added to your Steam account game library.
STEAM VOUCHER : This is a Steam Voucher which allow you to get a CD Key to download and play Marvel’s Guardians of the Galaxy on Steam. Follow the instructions given by the store.
Bundle
Deluxe Edition
Deluxe Bundle
Standard Edition
Compare Choose & Buy Download (723)

I bought this game a few weeks ago. I was skeptical because of the let down Avengers was. I mean, that game has its fun moments but it didn’t suck you in enough and the multiplayer trumped the single player stuff which really made it hard to get me attached. The multiplayer part wasn’t even done well. But a friend gifted me some money for Christmas to buy FF7 Remake Intergrade for PC and thanks to a coupon on the Epic Games Store, I had enough left over to grab MGotG! I played a little bit of FF7 first. I got to a tedious part so I took a break. My same friend was telling me his achievements on Assassin’s Creed: Valhalla and it was making me want to play that. I tried to open that game and it needed to do a 60 gb update. My gaming time is precious so while that was updating, I fired up Guardians instead. Title screen instantly told me that his was a good buy and it could only get better from there… and it did!

The animations and the range of emotion on all these character’s faces are top notch! Not to mention the music is god tier!!! I played 8 hours that day! Thank god my wife was experimenting with her nails or I would have heard a good amount of complaining. I wouldn’t have paid attention to it though, I was fully enamored by this game! I won’t spoil anything about the story but it is a wonderful blend of comic book universe and cinematic universe and thankfully creates its own identity that I think outshines that of those established universes we know and love. They fill each character with so much life that I really want this game franchise to continue to grow into something bigger. It’s about time that we got a very unique and emotional game that features an unlikely good choice of intellectual property. You have no idea how much I doubted this game. I watched many streams of people playing this and thought how boring this looks to play. Boy, was I flarking wrong!
Just so you know, this game is a solo adventure. You play as Star-Lord only. You can tell your team mates how to join in on the fight. There is major satisfaction when you tell Rocket to fire every damn weapon he has on him though “Rocket! Give it all you got!!!” -Quill. The commanding of your team is done well and I haven’t been let down by it. I only wish that you could maybe do some side missions where you play as Gamora or Drax or any of the others “This is physically impossible.” -Drax. It would be cool to see a level or two from their perspective entirely. You could be fighting a bunch scut-holes and then you get a command from Quill to attack someone or use a certain maneuver. But don’t get me wrong, they way they involve each character makes you feel like you are fighting with them and that you are controlling them.
Other than the common visual glitches that plague every game ever made, I give it 10/10 and I really want to see this become a giant franchise. I have never been so obsessed with a game since Assassin’s Creed 2. If you were looking for something to play that will wow you, I recommend getting it.

Looks like a pretty cool game, especially when it was made by Eidos and published by Square Enix
Discord: RenRen#4555

Not sure what to think about this game – I love Guardians of the Galaxy, but this is more like the “The Random Characters of the Galaxy”. They really need to tie in the games with the movies, instead of just using generic looks :/

But hopefully the game can set itself apart from Marvel’s Avengers, because we all know how “well” that was received and plays…. it’s not looking too good so far (and
the cheapest pre-order price is a clear indication of that).

I don’t see why it needs to be tied in with the movies. You know the movies are based on comics, right? Just like this game. In comics, most characters get different looks all the time. I don’t understand why they have to look like the movie actors. Just be glad they’re making games about these cool characters and stop comparing them to the movies.