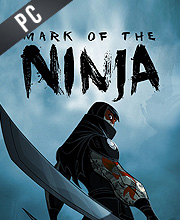 What is Mark of the Ninja CD key?

It's a digital key that allows you to download Mark of the Ninja directly to PC from the official Platforms.

How can I find the best prices for Mark of the Ninja CD keys?

Allkeyshop.com compares the cheapest prices of Mark of the Ninja on the digital downloads market to find the best sales and discount codes on trusted stores.

Mark of the Ninja is a side-scrolling action–adventure stealth video game published by Microsoft Studios and developed by Klei Entertainment which are famed for their work on games such as Shank, Shank 2, the survival game Don’t Starve and lastly, the incredibly fun game, Stealth, Inc.

Mark of the Ninja’s mechanic is incredible and features a true-to-life ninja story in which you are not a badass during a fight, but instead, you will approach enemies with stealth to actually take them. It also features elements of puzzle-solving in it for a more unique game experience. It features unique 2D visual style featuring award-winning animation and hand-painted environments for a visually appealing take on a ninja game. Each level has three score challenges, optional objectives, and hidden collectibles. A variety of unlockable abilities, items and play styles allow new avenues of play.

The Ninja, a tool of assassination, an agent of destruction, a shadow that briefly appears before disappearing, leaving death and chaos in its wake.

GOG.COM CD KEY : You need to register on Gog.com, then use the GOG Key to download and activate your game to play Mark of the Ninja.
PUBLISHER WEBSITE CD KEY: Use the CD Key Code to download directly on the Official Website or from the store to play Mark of the Ninja. Follow the instructions given by the store. Verify languages available and possible region restrictions before buying.
STEAM GIFT : A Steam gift is a one-time transfer you receive. You activate and install Mark of the Ninja to play on Steam, it is a non-refundable game that stays in your Steam games collection. Please read the store description about any language or region restrictions.
STEAM CD KEY : Use the Steam Key Code on Steam Platform to download and play Mark of the Ninja. You must login to your Steam Account or create one for free. Download the (Steam Client HERE). Then once you login, click Add a Game (located in the bottom Left corner) -> Activate a Product on Steam. There type in your CD Key and the game will be activated and added to your Steam account game library.
Remastered Edition
Special Edition
Standard Edition

Only €1,24?!! I already own this game, but else I would totally buy it. It’s a great 2d stealth game. See if you can become the ultimate Ninja and decide your Fate!

Mark of The Ninja is a 2D Stealth platformer where you play a ninja. Level design, art, sound etc. nearly everything is done great. It’s considered one of the best indie games.