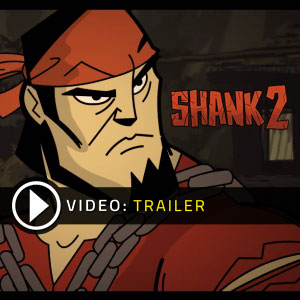 It's a digital key that allows you to download Shank 2 directly to PC from the official Platforms.

How can I find the best prices for Shank 2 CD keys?

Allkeyshop.com compares the cheapest prices of Shank 2 on the digital downloads market to find the best sales and discount codes on trusted stores.

Shank 2 is a 2D side scrolling action adventure indie beat em up video game. It is the sequel to Shank and is developed and published by Klei Entertainment.

Play as Shank as he saves Elena, his mentor who was kidnapped by the militia’s forces.The game continues from the first game with the death of the cartel leader Cesar. With Cesar gone, a lot of factions tried to take over reeking war all over the land. One person, however, was victorious in taking control – that is General Magnus. He is strict and rules with an iron fist. He has declared himself President and has overthrown the government, once again bringing to the life the cartel’s criminal activities.

You will be equipped with knives, a melee weapon and a ranged weapon. Other weapons that can be used in the game are stuff that are dropped by your enemies. Aside from weapons you will also have other means of attacking; you can use some grapple attacks and also have the ability to pounce on your enemies. A new feature to the game is that you are able to perform counter attacks to your enemies.

A multiplayer mode is also featured in the Story Mode where in which you and the other player will be fighting off waves and waves of enemies and defending the supply stations.

Zoom 1m 3m 1y All
Track product
STEAM CD KEY : Use the Steam Key Code on Steam Platform to download and play Shank 2. You must login to your Steam Account or create one for free. Download the (Steam Client HERE). Then once you login, click Add a Game (located in the bottom Left corner) -> Activate a Product on Steam. There type in your CD Key and the game will be activated and added to your Steam account game library.
Standard Edition
Compare Choose & Buy Download (743)