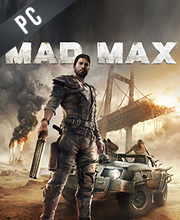 What is Mad Max CD key?

It's a digital key that allows you to download Mad Max directly to PC from the official Platforms.

How can I find the best prices for Mad Max CD keys?

Allkeyshop.com compares the cheapest prices of Mad Max on the digital downloads market to find the best sales and discount codes on trusted stores.

Mad Max is a post-apocalyptic, vehicular combat video game set in an open world environment. Developed by Avalanche Studios and published by Warner Brothers Interactive Entertainment, this game is based on the Mad Max film series.

The story begins as Max is travelling to the Plains of Silence. He gets ran off the road by a bunch of bandits, stealing his car. Witnessing the whole event is Chumbucket a hermit-like, brilliant mechanic who helps Max and together forms an unlikely alliance, to build the ultimate machine- the Magnum Opus.

The game features a variety of weapons. A shotgun, which is Max’s favorite, but ammo is sparse. So, you also have other choices like the Thunderstick, an explosive weapon, when lanced unto the enemy’s chest, blows them up. A harpoon, an in-vehicle weapon used with Chumbucket. You can also use Magnum Opus pairing it with a V12 engine to ram enemy vehicles and weaponry.

Flame throwers and mounted cannons are also an option. Although the game is viewed at a third-person perspective, you can switch to a first-person view when engaging in combat. Access your garage screen anytime to customize your vehicle and weaponry.

Enjoy vehicular battles? Then this game is definitely for you!

Bonus: Mad Max + The Ripper  (Can be different or change over time for each seller. Please refer to the seller’s website)

Zoom 1m 3m 1y All
Track product
GOG.COM CD KEY : You need to register on Gog.com, then use the GOG Key to download and activate your game to play Mad Max.
ORIGIN CD KEY : Use the Origin Key Code (Electronic Arts - EA) on Origin Platform to download and play Mad Max. You have to login to your Origin Account or create one for free. Download and install the Origin Software HERE) then you can activate the game on it. Once installed, start Origin, click on the Origin Tab and click on Redeem Product Code and just enter the key. The game will appear in your My games list.
EU STEAM CD KEY: Requires an EUROPEAN IP address or you must activate it with a VPN (Virtual Private Network) in order to play Mad Max. Might have languages restrictions or language packs. Read the description on the store game page to know if the EU IP is only needed for activation or for playing also (maybe on EU Servers). Most of the stores offer you their help, or show you how to do this with a tutorial to follow.
STEAM CD KEY : Use the Steam Key Code on Steam Platform to download and play Mad Max. You must login to your Steam Account or create one for free. Download the (Steam Client HERE). Then once you login, click Add a Game (located in the bottom Left corner) -> Activate a Product on Steam. There type in your CD Key and the game will be activated and added to your Steam account game library.
STEAM KEY ROW : It means for Rest Of the World countries which are not concerned by the region restrictions. This product can't be purchased and activated in Several countries. Please read the store description to know the full list of countries which are concerned. Use the key to Download and play Mad Max on Steam.
Bonus Edition
Bundle
Standard Edition
Compare Choose & Buy Download (759)

Very underated game. It is a full AAA open world game with very realisitic environment. I love riding the desert with the car. Highly recomnended!

This game is an open world madness , the fun kind of madness

As comments say some reviewers loved this game while others say it was lacking. Personally, I enjoyed it. Yes, it has repetitive nature as most open world games, but combat was nice. Upgrading your car and customizing it also felt great. I believe this game is greatly underrated as it is one of the better open world games. At current price you just have to take it.

Mad max.. a game with a nice open world where you just can’t get bored, a good combat system.. beautiful graphics.. and a decent story, its the type of a game that even after you finish the story you won’t get bored of playing it, I highly recommend it !

Great game one of the few games i have completed 100%, a bit of a grind but fun mechanics and really nice apocalyptic world, the car battles are nice but the fist fights are even better 😀