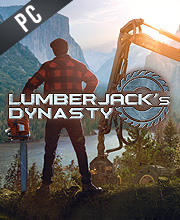 What is Lumberjack's Dynasty CD key?

It's a digital key that allows you to download Lumberjack's Dynasty directly to PC from the official Platforms.

How can I find the best prices for Lumberjack's Dynasty CD keys?

Allkeyshop.com compares the cheapest prices of Lumberjack's Dynasty on the digital downloads market to find the best sales and discount codes on trusted stores.

Get to play as a lumberjack in this unique life simulation. Build up the business that was left to you and make it so that it will be sustainable for the generations to come.

The game is a combination of forestry, logging, business and life simulations. It also comes with some role-playing elements.

Your aunt and uncle has left you a run-down logging camp, you must restore this to its former glory as well as improve production. There will be a lot of different quests to enjoy that will either help you in the business or level up your character’s skill.

Offering a quest driven storyline, a huge open world, a wide variety of individual characters to interact with, a skill system, a dynamic economic engine, the control of heavy machinery, manufacturing, repair, social points and so much more.

Get to build your great success with Lumberjack’s Dynasty.

EPIC GAMES KEY : Region Free / Worldwide. Requires Epic Games Launcher App in order to play the game. You need to create a free account here in order to download Lumberjack's Dynasty from Epic Plateform . Read the description on the store page about any language or country restrictions.
GOG.COM CD KEY : You need to register on Gog.com, then use the GOG Key to download and activate your game to play Lumberjack's Dynasty.
EU STEAM CD KEY: Requires an EUROPEAN IP address or you must activate it with a VPN (Virtual Private Network) in order to play Lumberjack's Dynasty. Might have languages restrictions or language packs. Read the description on the store game page to know if the EU IP is only needed for activation or for playing also (maybe on EU Servers). Most of the stores offer you their help, or show you how to do this with a tutorial to follow.
EUROPEAN STEAM GIFT : It’s a steam gift for Europe which requires an European IP address to activate and to play Lumberjack's Dynasty on Steam. Read carefully the store description about region and language restrictions.
STEAM GIFT : A Steam gift is a one-time transfer you receive. You activate and install Lumberjack's Dynasty to play on Steam, it is a non-refundable game that stays in your Steam games collection. Please read the store description about any language or region restrictions.
STEAM CD KEY : Use the Steam Key Code on Steam Platform to download and play Lumberjack's Dynasty. You must login to your Steam Account or create one for free. Download the (Steam Client HERE). Then once you login, click Add a Game (located in the bottom Left corner) -> Activate a Product on Steam. There type in your CD Key and the game will be activated and added to your Steam account game library.
Bundle
Complete Edition
Early Access
Standard Edition
Supporter Edition