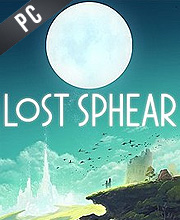 What is LOST SPHEAR CD key?

It's a digital key that allows you to download LOST SPHEAR directly to PC from the official Platforms.

How can I find the best prices for LOST SPHEAR CD keys?

Allkeyshop.com compares the cheapest prices of LOST SPHEAR on the digital downloads market to find the best sales and discount codes on trusted stores.

Lost Sphear is a role-playing video game that is developed by Tokyo RPG Factory and published by Square Enix. This is the evolution of the new golden age of Japanese Role Playing Games that offers a brand new take on the classic Role Playing gameplay!

The story starts with a young male explorer named Kanata along with his friends Locke and Lumina. They are looking for a way to destroy the “White Fog” a phenomenon which is slowly destroying their hometown.

This is a place where every single being is created with memories. When a memory is forgotten a part of the world where the memory is created vanishes into the White. The people call this phenomenon Lost.

Explore the world of the Laguness armored castle, it is believed that it was built by an ancient civilization. The castle is cloaked in myth. It is said that the original Vulco Suit is hidden in the deepest part of the castle. Another exploration comes to the sacred mountain Rahitto. A mountain that stands high within the empire territory. It is believed that the mythical metal can be mined in the area known as Terramite. The residents of the mountain are rumored to have the ability to speak with the monsters.

Equip your character with Vulcosuits – a specialized mechanical suits of armor. That was passed down from ancient civilization. It amplifies the physical abilities of your player. Including exerting different abilities.

Zoom 1m 3m 1y All
Track product
EU STEAM CD KEY: Requires an EUROPEAN IP address or you must activate it with a VPN (Virtual Private Network) in order to play LOST SPHEAR. Might have languages restrictions or language packs. Read the description on the store game page to know if the EU IP is only needed for activation or for playing also (maybe on EU Servers). Most of the stores offer you their help, or show you how to do this with a tutorial to follow.
STEAM CD KEY : Use the Steam Key Code on Steam Platform to download and play LOST SPHEAR. You must login to your Steam Account or create one for free. Download the (Steam Client HERE). Then once you login, click Add a Game (located in the bottom Left corner) -> Activate a Product on Steam. There type in your CD Key and the game will be activated and added to your Steam account game library.
Collector Edition
Standard Edition
Compare Choose & Buy Download (772)

LOST SPHEAR is good game , you can buy it with good price

This looks like a really fun game! I would totally play this! 🙂

it looks like an intriguing game! i am puting this game on my wishlist.

Try the Demo of this game before its release to have a general view of the game, I am sure you would like it if you are a JRPG fan!

To be honest i just wanna win some coins and play some other games with my friends..