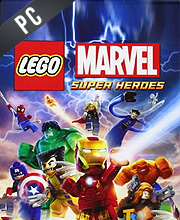 It's a digital key that allows you to download LEGO Marvel Superheroes directly to PC from the official Platforms.

How can I find the best prices for LEGO Marvel Superheroes CD keys?

Allkeyshop.com compares the cheapest prices of LEGO Marvel Superheroes on the digital downloads market to find the best sales and discount codes on trusted stores.

The game features gameplay similar to other earlier Lego titles such as Lego Star Wars: The Complete Saga and Lego Batman 2: DC Super Heroes where you have options to pick between various action-adventure sequences and puzzle-solving scenarios.

LEGO Marvel Super Heroes is game where you can choose a superhero of your choice in the Marvel Universe. You get to control a Lego version of your favorite marvel icons like Iron Man, Spider-Man, the Hulk, Captain America, Wolverine, and many more in an intense battle to stop Loki and a series of other Marvel villains creating a super-weapon capable of destroying the world.

This is definitely one of the best LEGO games ever. It’s great to play in CO-OP, and there are many characters to unlock and play as. The game includes a huge open world to explore, and there are a lot of varieties in missions. Graphics are also very impressive for a Lego game! The game is suitable to all ages and is highly recommended to anyone who wants to take a break from all the gore and blood.

Be the first one to write a review about LEGO Marvel Superheroes !