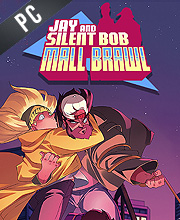 What is Jay and Silent Bob Mall Brawl CD key?

It's a digital key that allows you to download Jay and Silent Bob Mall Brawl directly to PC from the official Platforms.

How can I find the best prices for Jay and Silent Bob Mall Brawl CD keys?

Allkeyshop.com compares the cheapest prices of Jay and Silent Bob Mall Brawl on the digital downloads market to find the best sales and discount codes on trusted stores.

This is a full 8-bit beat ‘em up experience where a mall incident has our two protagonists (Jay and Silent Bob) running. They are being pursued by some off duty officers as well as the chief rent-a-cop.

Both Jay and Silent Bob must escape this precarious ordeal in the mall and reach the Quickstop.

The game comes with big levels, huge bosses and amazing combos. Players will encounter a boss with a huge fist as well as a boss with a pretzel for a head. You will be humming along to the game’s original chiptune soundtrack.

You can play the game solo and just swap between Jay and Silent Bob or you can also play in 2-player co-op with one playing Jay and the other Silent Bob.

Get moving and fight through delinquents, mall rats and security guards, make sure you make it to the Quickstop.

Zoom 1m 3m 1y All
Track product
STEAM CD KEY : Use the Steam Key Code on Steam Platform to download and play Jay and Silent Bob Mall Brawl. You must login to your Steam Account or create one for free. Download the (Steam Client HERE). Then once you login, click Add a Game (located in the bottom Left corner) -> Activate a Product on Steam. There type in your CD Key and the game will be activated and added to your Steam account game library.
Standard Edition
Compare Choose & Buy Download (772)