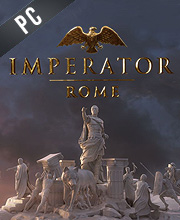 What is Imperator Rome CD key?

It's a digital key that allows you to download Imperator Rome directly to PC from the official Platforms.

How can I find the best prices for Imperator Rome CD keys?

Allkeyshop.com compares the cheapest prices of Imperator Rome on the digital downloads market to find the best sales and discount codes on trusted stores.

Imperator Rome is a grand strategy game by paradox interactive themed around the Classical antiquity era when civilizations were mostly centered around the Mediterranean specifically during the foundations of ancient Rome when nations regularly fought each other when great men like Alexander, Hannibal, Caesar changed the continent forever and forge a cultural and political legacy that would later become western civilization as we know it. Can you change the course of history? In Imperator: Rome.

Imperator: Rome is a well-done, huge game in the grand strategy tradition. Given that genre, it is easy and fun to play, with an informative, aesthetically pleasing interface that is just a touch too busy in some places. There is a lot of depth buried in its various systems, and serious min-maxers will definitely be wading through ponderous tomes of rules.

Imperator: Rome is a game of potentials and political pacing. I’ve united the British tribes and pushed onto the continent, I’ve created a large nation in modern Spain, I’ve taken Phrygia as Armenia. I’ve also been smashed to bits in my first war as Alupa and wiped while trying to start up as the Vandals and head down into Europe a couple of centuries ahead.

The Centurion Edition includes all the themed expansion of the game!

In 322-275 BC the Diadochi warred with each other, all claiming the rightful heir of Alexander’s legacy, These took place in the Hellenistic kingdoms of the eastern Mediterranean and Asia.

Even after Greece’s collapse a few of its city-states still want to maintain their independence namely Athens, Sparta, and Syracuse, Magna Graecia Expands on these City-states’ struggles against would-be colonizers of Rome, Carthage Alexanders heirs.

280–275BC after winning the war against the Etruscans the roman republic was poised to expand southward the lands Greek states of south Italy asked for help in the lands of the Greek proper, king Pyrrhus of Epirus answered the call and battled against the Romans.

Find all the best prices for Imperator Rome DLC’s on Allkeyshop!

Zoom 1m 3m 1y All
Track product
GOG.COM CD KEY : You need to register on Gog.com, then use the GOG Key to download and activate your game to play Imperator Rome.
EU STEAM CD KEY: Requires an EUROPEAN IP address or you must activate it with a VPN (Virtual Private Network) in order to play Imperator Rome. Might have languages restrictions or language packs. Read the description on the store game page to know if the EU IP is only needed for activation or for playing also (maybe on EU Servers). Most of the stores offer you their help, or show you how to do this with a tutorial to follow.
EUROPEAN STEAM GIFT : It’s a steam gift for Europe which requires an European IP address to activate and to play Imperator Rome on Steam. Read carefully the store description about region and language restrictions.
STEAM GIFT : A Steam gift is a one-time transfer you receive. You activate and install Imperator Rome to play on Steam, it is a non-refundable game that stays in your Steam games collection. Please read the store description about any language or region restrictions.
STEAM CD KEY : Use the Steam Key Code on Steam Platform to download and play Imperator Rome. You must login to your Steam Account or create one for free. Download the (Steam Client HERE). Then once you login, click Add a Game (located in the bottom Left corner) -> Activate a Product on Steam. There type in your CD Key and the game will be activated and added to your Steam account game library.
STEAM KEY ROW : It means for Rest Of the World countries which are not concerned by the region restrictions. This product can't be purchased and activated in Several countries. Please read the store description to know the full list of countries which are concerned. Use the key to Download and play Imperator Rome on Steam.
Windows 10 Global : This is an Worldwide Microsoft code to play on PC for Worldwide . You need to have installed Windows 10 Anniversary Edition update on your PC. Log into your Microsoft account to download and play. Read closely the description given by the store to activate your game.
Centurion Edition
Deluxe Edition
Premium Edition
Preorder bonus
Standard Edition
Compare Choose & Buy Download (772)

I just bought it via Voidu EU and I am very happy with the price I paid!

Lovely game! Personally, I wouldn’t play it because it’s way too complex for me, but it’s still a great game.

Having your underlings desert or betray you sounds interesting but hope it’s not too common on lower difficulties.

Well tomorrow is the day of its release, and we gonna see how it is different and more enhanced than Europa Universalis: Rome, too many deals to pick from!

Come on, too many nice game are coming out on the market, give my wallet a break!