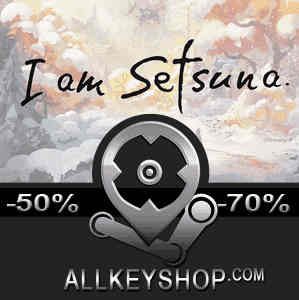 What is I Am Setsuna CD key?

It's a digital key that allows you to download I Am Setsuna directly to PC from the official Platforms.

How can I find the best prices for I Am Setsuna CD keys?

Allkeyshop.com compares the cheapest prices of I Am Setsuna on the digital downloads market to find the best sales and discount codes on trusted stores.

I Am Setsuna is a role-playing video game developed by Tokyo RPG Factory and published by Square Enix Ltd. (The game is also known as a JRPG or a Japanese Role Playing Game).

The game’s story is about a young woman named Setsuna who has such an amazing inner strength as well as a great love for the people of her land that she is willing to sacrifice so much.

In the island where she lives an ancient custom has been upheld. In order for the people of the land to live in peace, a sacrifice must be given to a dangerous fiend in the island. Everything was going well until one year, before reaching the due date of the next sacrifice, the fiend of the island became vicious.

The people are fearing for their very lives and decided to appease the fiend by giving a sacrifice, for which Setsuna was chosen because she has powers of enchantment. She will now need to journey with her safeguards to reach her destination.

An absolutely stunning game with a new battle system inspired by the classic game Chrono Trigger. Character designs are beautifully made and the storyline will surely enchant you.

Collector: I Am Setsuna + Soundtrack

EUROPEAN STEAM GIFT : It’s a steam gift for Europe which requires an European IP address to activate and to play I Am Setsuna on Steam. Read carefully the store description about region and language restrictions.
STEAM GIFT : A Steam gift is a one-time transfer you receive. You activate and install I Am Setsuna to play on Steam, it is a non-refundable game that stays in your Steam games collection. Please read the store description about any language or region restrictions.
STEAM CD KEY : Use the Steam Key Code on Steam Platform to download and play I Am Setsuna. You must login to your Steam Account or create one for free. Download the (Steam Client HERE). Then once you login, click Add a Game (located in the bottom Left corner) -> Activate a Product on Steam. There type in your CD Key and the game will be activated and added to your Steam account game library.
Collector Edition
Standard Edition

This game is 40€ in Steam (Europe), 34 on this website, but only 24 if you buy from Asia on Steam.
Both equity and logic are out the window here