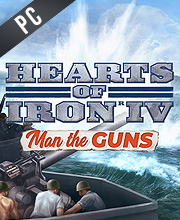 What is Hearts of Iron 4 Man the Guns CD key?

It's a digital key that allows you to download Hearts of Iron 4 Man the Guns directly to PC from the official Platforms.

How can I find the best prices for Hearts of Iron 4 Man the Guns CD keys?

Allkeyshop.com compares the cheapest prices of Hearts of Iron 4 Man the Guns on the digital downloads market to find the best sales and discount codes on trusted stores.

The Man the Guns expansion comes decked out with some new and very exciting features. These Features include:

You can utilize the influence of the American Congress to push for reform, whilst risking the possibility of hurling the nation into another civil war.

You may push for an early decolonization of the British Empire or invest your efforts in restoring the ancient privileges the monarchy awarded.

You can even research new components and refit older vessels to utilize newly acquired knowledge. Improve upon your submarines with snorkels or enhance stealth.

Edit and level up your Admirals with new traits and skills.

Host a government in exile to your democracy and increase their legitimacy in exchange for more manpower and elite troops fighting to free their homeland.

New national focuses for The Netherlands and Mexico.

Protect your coasts from invasion or assault with anti-ship mines, or clear a path through enemy mines before you make the big push.

This expansion also allows you to plot new routes for your shipping and navies by marking areas you want to avoid.

It is a constant struggle to keep the peace by following internationally agreed upon rules but it can be rewarding should you choose to abide by the terms set. Insubordination also comes with its share of rewards so you may also choose to defy the world consensus by exceeding your limits.

Add power to your beach landing by researching and producing specialized combat vehicles for your marines.

Enjoy the original music that has been composed specifically for the Man the Guns expansion.

Hearts of Iron is a great strategy series.. Paradox really knows how to make them (and add good paid content to it). Would be nice to play 🙂

I like strategic games and is very cheap :D. I didn’t know about this game but look so nice :).

Hearts of Iron 4 Man the Guns is awesome game, you can buy it now with best price.

Not a lot of stores have that expension for now. Maybe more in the futur. Prices still correct. HF

I enjoy it quite a bit. I recommend getting just the base game to see if you would like it and having an easier time learning. Then getting the dlcs latter to add more complexity and more focus trees.