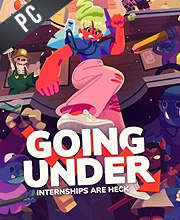 What is Going Under CD key?

It's a digital key that allows you to download Going Under directly to PC from the official Platforms.

How can I find the best prices for Going Under CD keys?

Allkeyshop.com compares the cheapest prices of Going Under on the digital downloads market to find the best sales and discount codes on trusted stores.

Going Under is an action-oriented roguelike dungeon crawler developed by Aggro Crab, you recently just got hired as an unpaid intern by a tech company called Cubicle and moved into Neo-Cascadia the city of elites and billionaires. Cubicle’s business model is that they sell subscription boxes and buy up failed startup companies to sell their assets but here’s the thing when companies go bankrupt in Neo-Cascadia, they don’t just disappear they sink to the ground and their employees turn into monsters forever cursed to roam around the companies’ halls, here’s where you come in, in order for Cubicle to take the company’s assets someone has to go down there and sort everything out.

With such a busy month in terms of noteworthy indie releases, it’d be an absolute crime for this curious gem to go unnoticed. There’s never been a more appropriate time for Going Under to exist, and we’re living in a far better place now than it does.

In all, Going Under is the type of game to go above and beyond in its quirky mannerisms, being unafraid to poke fun at both the real world it parodies and even itself. This is a game I highly recommend if any gamer has an appreciation for dungeon crawling, bright colors, or humor in sheer parody fashion.

This Edition contains the Roguelike Bundle which contains 3 games from team 17’s catalog.

This Edition contains the base game for Going Under and the game’s official soundtrack which includes 29 tracks in total.

Zoom 1m 3m 1y All
Track product
EPIC GAMES KEY : Region Free / Worldwide. Requires Epic Games Launcher App in order to play the game. You need to create a free account here in order to download Going Under from Epic Plateform . Read the description on the store page about any language or country restrictions.
EU STEAM CD KEY: Requires an EUROPEAN IP address or you must activate it with a VPN (Virtual Private Network) in order to play Going Under. Might have languages restrictions or language packs. Read the description on the store game page to know if the EU IP is only needed for activation or for playing also (maybe on EU Servers). Most of the stores offer you their help, or show you how to do this with a tutorial to follow.
STEAM GIFT : A Steam gift is a one-time transfer you receive. You activate and install Going Under to play on Steam, it is a non-refundable game that stays in your Steam games collection. Please read the store description about any language or region restrictions.
STEAM CD KEY : Use the Steam Key Code on Steam Platform to download and play Going Under. You must login to your Steam Account or create one for free. Download the (Steam Client HERE). Then once you login, click Add a Game (located in the bottom Left corner) -> Activate a Product on Steam. There type in your CD Key and the game will be activated and added to your Steam account game library.
Deluxe Edition
Standard Edition
Compare Choose & Buy Download (772)