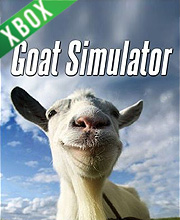 What is Goat Simulator Game Code?

It's a digital key that allows you to download Goat Simulator directly to Xbox One from Xbox Live.

How can I find the best prices for Goat Simulator on Xbox one?

Allkeyshop.com compares the cheapest prices of Goat Simulator on the digital downloads market to find the best sales and discount codes on trusted stores.

Goat Simulator is an Open-world satirical comedy game where you play as a goat and explore the vast human city of Goatsville and cause as much destruction as you can to accrue a frivolous number of points, you can also complete secondary objectives like finding all the collectible trophies hidden throughout the city, and completing various game achievements.

It will offer you a very funny and goofy few hours of fantastically mindless gameplay and clever humor, but after those few hours, you probably won’t have any desire to go back. There isn’t much to the game aside from the easter eggs. Everything essentially functions as a vessel for you to laugh at various things throughout, but once those discoveries are made, the game’s appeal quickly fades.

I mean, everything about the game appeals to me, and I could only take it in half-hour increments, so I can’t imagine how it would be for someone who isn’t in love with the concept. Goat Simulator isn’t exactly the kind of game that’s going to win over people who are already suspicious that it’s just one big joke. But that’s because it is a joke.

This Edition of the game contains the Goat Simulator base game plus the Waste of Space DLC.

This Edition of the game contains the Goat Simulator base game, all 4 GOTY DLC’s, and the game’s official digital soundtrack.

The Goat Simulator GoatZ DLC drops you into an entirely new map with new areas to explore and new mechanics to exploit, it has the same gameplay loop as the base game, but this time you have to survive in the zombie apocalypse for as long as you can, complete with a new health bar and hunger mechanics. To help you with survival you can use the all-new crafting system to make all kinds of items and weapons.

Goat Simulator PAYDAY DLC is part of the PAYDAY 2 crossover event, it drops you into an entirely new map with new areas to explore and new mechanics to exploit, it has the same gameplay loop as the base game.

Goat Simulator Waste of Space DLC takes you to goat kinds final frontier outer space, the DLC parodies popular sci-fi movies, games, and TV shows. Explore new areas and exploit new mechanics, It has the same gameplay features as the base game but with a new twist.

Find all the best prices for Goat Simulator DLC’s on Allkeyshop!

Weird but interesting game, another fun simulator for the fans and others…