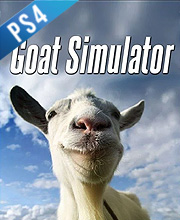 What is Goat Simulator Game Code?

It's a digital key that allows you to download Goat Simulator directly to Playstation 4 from PSN (Playstation network).

Allkeyshop.com compares the cheapest prices of Goat Simulator on the digital downloads market to find the best sales and discount codes on trusted stores.

Goat Simulator is an Open-world satirical comedy game where you play as a goat and explore the vast human city of Goatsville and cause as much destruction as you can to accrue a frivolous number of points, you can also complete secondary objectives like finding all the collectible trophies hidden throughout the city, and completing various game achievements.

Great fun, especially with friends, Goat Simulator is so out there and different to the norm that you can’t help but have a good time, and laugh along with it.

Brad and I Share Played the game with no hitches and it was a pretty good time. I guess it’s not so intensive that it would be affected by being streamed. Also, it probably isn’t noticeable since the whole game is essentially broken anyways. Surgeon Simulator used to be my go-to silly, cooperative, party-friendly game. I’m glad to add Goat Simulator to that list.

This Edition of the game contains the Goat Simulator base game, the two nightmare edition DLCs, and the game’s official digital soundtrack.

The Goat Simulator GoatZ DLC drops you into an entirely new map with new areas to explore and new mechanics to exploit, it has the same gameplay loop as the base game, but this time you have to survive in the zombie apocalypse for as long as you can, complete with a new health bar and hunger mechanics. To help you with survival you can use the all-new crafting system to make all kinds of items and weapons.

Goat Simulator PAYDAY DLC is part of the PAYDAY 2 crossover event, it drops you into an entirely new map with new areas to explore and new mechanics to exploit, it has the same gameplay loop as the base game.

Goat Simulator Waste of Space DLC takes you to goat kinds final frontier outer space, the DLC parodies popular sci-fi movies, games, and TV shows. Explore new areas and exploit new mechanics, It has the same gameplay features as the base game but with a new twist.

Find all the best prices for Goat Simulator DLC’s on Allkeyshop!