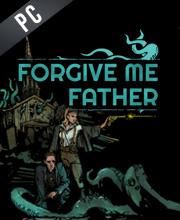 What is Forgive me Father CD key?

It's a digital key that allows you to download Forgive me Father directly to PC from the official Platforms.

How can I find the best prices for Forgive me Father CD keys?

Allkeyshop.com compares the cheapest prices of Forgive me Father on the digital downloads market to find the best sales and discount codes on trusted stores.

Forgive me father is a retro horror FPS game inspired by the stories of H.P. Lovecraft and developed by Byte Barrel, in this world you are the only person left who still has his senses (most of them), embark on a long journey to find answers and a sense of relief in this maddening world. You must become aware of your madness level which can dynamically change the level physically and the gameplay itself which has its benefits and drawbacks. Choose the skills you are comfortable with and use them to fight against this indescribable evil.

Forgive Me Father is a good first-person shooter that, despite embracing the retro concept, does not rely on nostalgia to draw players in. I played it relatively cautiously, conserving ammo when I could, and I didn’t feel like the madness system worked against me. But the game is at its best in the big arena fights, with big groups of enemies, a shredding soundtrack, and no option but to take the fight to them.

Forgive me Father delivers well on its premise. There’s a real sense of passion and identity to this game. From the story to the visuals to the level design, you can tell the developers have a lot of love for the genres they are working with. Their creativity pays off with a great game that pays homage to retro games and films alike.

This Is My Boomstick Bundle contains three games all themed around classic ’90s running and gunning down monsters, demons, aliens, etc. all of them having different developers and published by Fulqrum Publishing.

Zoom 1m 3m 1y All
Track product
GOG.COM CD KEY : You need to register on Gog.com, then use the GOG Key to download and activate your game to play Forgive me Father.
EU STEAM CD KEY: Requires an EUROPEAN IP address or you must activate it with a VPN (Virtual Private Network) in order to play Forgive me Father. Might have languages restrictions or language packs. Read the description on the store game page to know if the EU IP is only needed for activation or for playing also (maybe on EU Servers). Most of the stores offer you their help, or show you how to do this with a tutorial to follow.
STEAM CD KEY : Use the Steam Key Code on Steam Platform to download and play Forgive me Father. You must login to your Steam Account or create one for free. Download the (Steam Client HERE). Then once you login, click Add a Game (located in the bottom Left corner) -> Activate a Product on Steam. There type in your CD Key and the game will be activated and added to your Steam account game library.
STEAM KEY ROW : It means for Rest Of the World countries which are not concerned by the region restrictions. This product can't be purchased and activated in Several countries. Please read the store description to know the full list of countries which are concerned. Use the key to Download and play Forgive me Father on Steam.
Standard Edition
Compare Choose & Buy Download (772)