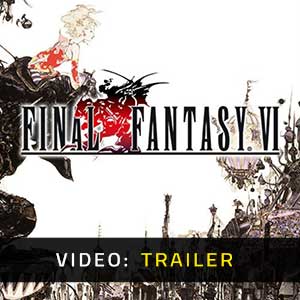 What is Final Fantasy 6 CD key?

It's a digital key that allows you to download Final Fantasy 6 directly to PC from the official Platforms.

How can I find the best prices for Final Fantasy 6 CD keys?

Allkeyshop.com compares the cheapest prices of Final Fantasy 6 on the digital downloads market to find the best sales and discount codes on trusted stores.

Magic vanished from the world as a result of the War between the Magi. A millennium later, humanity innovated and had to rely on machines up until they found a young woman with enigmatic powers.

Final Fantasy VI is easily the “crown jewel” of the pixel remaster releases given how much effort Square Enix put into it comparatively, and is certainly now the definitive version of the game to play.

Zoom 1m 3m 1y All
Track product
EUROPEAN STEAM GIFT : It’s a steam gift for Europe which requires an European IP address to activate and to play Final Fantasy 6 on Steam. Read carefully the store description about region and language restrictions.
STEAM GIFT : A Steam gift is a one-time transfer you receive. You activate and install Final Fantasy 6 to play on Steam, it is a non-refundable game that stays in your Steam games collection. Please read the store description about any language or region restrictions.
STEAM CD KEY : Use the Steam Key Code on Steam Platform to download and play Final Fantasy 6. You must login to your Steam Account or create one for free. Download the (Steam Client HERE). Then once you login, click Add a Game (located in the bottom Left corner) -> Activate a Product on Steam. There type in your CD Key and the game will be activated and added to your Steam account game library.
Bundle
Standard Edition
Compare Choose & Buy Download (759)