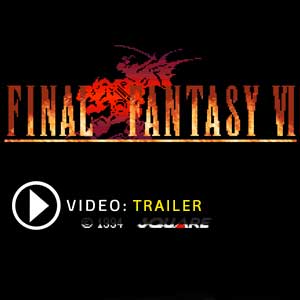 What is Final Fantasy 6 CD key?

It's a digital key that allows you to download Final Fantasy 6 directly to PC from the official Platforms.

How can I find the best prices for Final Fantasy 6 CD keys?

Allkeyshop.com compares the cheapest prices of Final Fantasy 6 on the digital downloads market to find the best sales and discount codes on trusted stores.

1000 years ago, Magi’s war has regressed humanity. The magic has disappeared , men are naturally directed towards technology and gradually they have turned the corner and forgot the terrible mistakes of the past. But some are rediscovering the power of magic and want to use it to secure the entire world.

So we discover a world where fantasy rubs steam engines and mechanisms worthy of a science fiction story, through an introduction that puts us in the mood very quickly. And in this world is an amnesia girl accompanied by two soldiers of the Empire Gesthal, she is in search of a mythical creature, related to magic: an Esper. He hides in the mines of the city of Narshe, hostile to the Empire.

Obviously, things go wrong, the Empire’s soldiers disappear and we find ourselves in the company of this girl, Terra, in search of her mysterious past and its own identity. On the road she will meet many friends but also powerful and cruel enemies. The troubled path will lead her from one surprise to another towards discovering her indentity, but this revelation is only the beginning of a great game and form a tiny plot of a magical scenario.

The main characters, whether good or bad, they have all a very elaborate psychology and personality. Their fates are mixed and intersect without to have the same end. The scenario is woven by a master hand, the challenges are stronger as each is revealed and the events are linked. We do not get bored for a second, and it is difficult to get out of the game as the storyline is immersive.

STEAM CD KEY : Use the Steam Key Code on Steam Platform to download and play Final Fantasy 6. You must login to your Steam Account or create one for free. Download the (Steam Client HERE). Then once you login, click Add a Game (located in the bottom Left corner) -> Activate a Product on Steam. There type in your CD Key and the game will be activated and added to your Steam account game library.
Bundle
Standard Edition