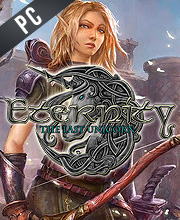 What is Eternity The Last Unicorn CD key?

It's a digital key that allows you to download Eternity The Last Unicorn directly to PC from the official Platforms.

How can I find the best prices for Eternity The Last Unicorn CD keys?

Allkeyshop.com compares the cheapest prices of Eternity The Last Unicorn on the digital downloads market to find the best sales and discount codes on trusted stores.

Eternity: The Last Unicorn is an action–RPG published by 1C Entertainment and developed by Void Studios for PC. This game is inspired by stories from Norse Mythology complimented by classic game mechanics that bring a nostalgic feeling to players.

The protagonist is a young, pureblood Elf named Aurehen. He is on a quest to free the last Unicorn who has been captured and cursed by witches. In the game, you are to assume the role of the young Elf and journey through mesmerizing locations, where you will meet amazing fantasy characters. You are also required to protect Elven immortality.

For an increased chance at success you must level up your weapons, acquire new skills and abilities throughout the span of the game.

The game features a fixed-camera system reminiscent of that which was present in old-school games. You will uncover and use new and more powerful items as you progress through each stage.

The game features two playable characters: The young elf, Aurehen, and the Viking, Bior. The characters each have unique backstories and character abilities. The developers promise at least 12 hours of gameplay and that you will enjoy the soundtrack as it adequately captures the Nordic and fantastical themes of the world of Eternity.

STEAM CD KEY : Use the Steam Key Code on Steam Platform to download and play Eternity The Last Unicorn. You must login to your Steam Account or create one for free. Download the (Steam Client HERE). Then once you login, click Add a Game (located in the bottom Left corner) -> Activate a Product on Steam. There type in your CD Key and the game will be activated and added to your Steam account game library.
STEAM KEY ROW : It means for Rest Of the World countries which are not concerned by the region restrictions. This product can't be purchased and activated in Several countries. Please read the store description to know the full list of countries which are concerned. Use the key to Download and play Eternity The Last Unicorn on Steam.
Standard Edition

This game has a very interesting look and it’s a good addition to the RPG genre.

There is too many games, iam very selective. Nice price for him.
HF

Eternity The Last Unicorn is good game, you can but it now with cheap price.

As Cervantes said the price is really cheap for such polished game, graphics are quite good and the gameplay looks interesting. I’ll surely try it out.