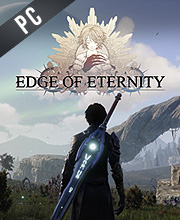 What is Edge Of Eternity CD key?

It's a digital key that allows you to download Edge Of Eternity directly to PC from the official Platforms.

How can I find the best prices for Edge Of Eternity CD keys?

Allkeyshop.com compares the cheapest prices of Edge Of Eternity on the digital downloads market to find the best sales and discount codes on trusted stores.

Edge of Eternity is the newest turn-based RPG created by a small team of passionate JRPG lovers. Set in the world of Heryon, where everything seems lost after the arrival of an unknown alien force that resulted in a cataclysmic war. In the present, a new threat has risen, the mysterious invaders released a sinister disease called “Corrosion”, turning living forms of all kinds into misshapen abominations. When all hope is gone, a young soldier will set foot in a journey no one has ever taken. Will he change the fate of Heryon?

Edge of Eternity has not only met, but surpassed my expectations in every way imaginable. It goes beyond simply being a “love letter to the classics” and has the potential to eventually become one itself someday, given that it gets a little bit of polish here and there (which I’ve already heard that it will be receiving, at least in part). In a gaming landscape that seems to have largely given up on many of the more traditional JRPGs, it’s nice to see that there are others out there who insist on keeping it alive—and it’s encouraging to see that they have the means to see things through.

All in all, Edge of Eternity is a fun game. Aside from some weird facial animations, and some other jank I really enjoyed my time in the world. As I said before the world itself is quite beautiful and inviting; it really goes to show just how good Unreal 4 engine can be. I know we are all hyped to see the new U5 games, but the old version still looks great. If you are a fan of the JRPGs from the 90’s and early 00’s then Edge of Eternity is for you. It has just enough nostalgia to make you smile when thinking about those old memories, but enough current systems and features that make it really feel like a product that is the best of both worlds.

Ambitious in size, scale, and scope, Edge of Eternity offers a somewhat enjoyable romp that could last you over 40 hours. Sadly, it’s also very rough around the edges, and poor pacing can be detrimental to your experience.

EPIC GAMES KEY : Region Free / Worldwide. Requires Epic Games Launcher App in order to play the game. You need to create a free account here in order to download Edge Of Eternity from Epic Plateform . Read the description on the store page about any language or country restrictions.
GOG.COM CD KEY : You need to register on Gog.com, then use the GOG Key to download and activate your game to play Edge Of Eternity.
EU STEAM CD KEY: Requires an EUROPEAN IP address or you must activate it with a VPN (Virtual Private Network) in order to play Edge Of Eternity. Might have languages restrictions or language packs. Read the description on the store game page to know if the EU IP is only needed for activation or for playing also (maybe on EU Servers). Most of the stores offer you their help, or show you how to do this with a tutorial to follow.
EUROPEAN STEAM GIFT : It’s a steam gift for Europe which requires an European IP address to activate and to play Edge Of Eternity on Steam. Read carefully the store description about region and language restrictions.
STEAM GIFT : A Steam gift is a one-time transfer you receive. You activate and install Edge Of Eternity to play on Steam, it is a non-refundable game that stays in your Steam games collection. Please read the store description about any language or region restrictions.
STEAM CD KEY : Use the Steam Key Code on Steam Platform to download and play Edge Of Eternity. You must login to your Steam Account or create one for free. Download the (Steam Client HERE). Then once you login, click Add a Game (located in the bottom Left corner) -> Activate a Product on Steam. There type in your CD Key and the game will be activated and added to your Steam account game library.
Deluxe Edition
Standard Edition

Edge Of Eternity is an amazing and beautifully made open world RPG, it feels like a Final Fantasy title with all the similarity in graphics, gameplay and atmosphere, it’s still sold on Steam only, will wait for more deals when it becomes available to Key stores.