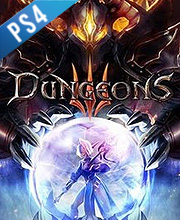 What is Dungeons 3 Game Code?

It's a digital key that allows you to download Dungeons 3 directly to Playstation 4 from PSN (Playstation network).

Dungeons 3 looks and plays simply compared to some of the other strategy games out there, but there’s a definite depth of challenge to the game that, coupled with its sense of humour and excellent co-op mode, make for the perfect game to kick back with on a lazy weekend afternoon and some beers. It’s hard not to love it for that.

Dungeons 3 Lord of the Kings

When the mighty King Arcturus returns from his journey with the Holy Grail in tow, he discovers that his city of Stormbreeze has been destroyed. He quickly got to work retaking the territory, but he had forgotten about the evil that always has the last laugh. Although the player first assists King Arcturus, they quickly switch to the Evil side where, with the aid of other heroes who have turned evil, they defeat him.

Dungeons 3 Evil of the Caribbean

Thalya has earned some peace and quiet after all of her exploits, so the Never-Gives-Subordinates-Vacation Evil sends her to Tortuga, a haven for pirates. However, it still has a few teeny-tiny responsibilities left for its general, including rum running, dealing with sea animals from the depths of the ocean, and still not paying off gambling debts.