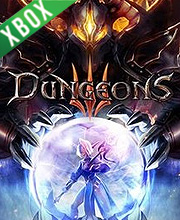 What is Dungeons 3 Game Code?

It's a digital key that allows you to download Dungeons 3 directly to Xbox One from Xbox Live.

How can I find the best prices for Dungeons 3 on Xbox one?

If you like a base builder that hearkens back to the age of Evil Genius and Dungeon Keeper, and can look past some performance issues and the occasionally stupid AI, then this is definitely one you should look at getting. It’s funny, it looks nice, and it will definitely fill that need to plunder and pillage.

Dungeons 3 Lord of the Kings

When the mighty King Arcturus returns from his journey with the Holy Grail in tow, he discovers that his city of Stormbreeze has been destroyed. He quickly got to work retaking the territory, but he had forgotten about the evil that always has the last laugh. Although the player first assists King Arcturus, they quickly switch to the Evil side where, with the aid of other heroes who have turned evil, they defeat him.

Dungeons 3 Once Upon A Time

The Good Fairy lives in Fairyland, where the Absolute Evil visits. This abhorrently nice creature gives heroes energizing potions and is typically the abhorrent wellspring of virtue. The Absolute Evil takes this tale to a horrible conclusion with the aid of some ensorcelled heroes and quite a few exploding sheep!