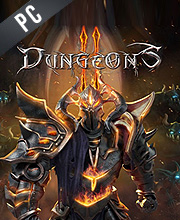 What is Dungeons 2 CD key?

It's a digital key that allows you to download Dungeons 2 directly to PC from the official Platforms.

How can I find the best prices for Dungeons 2 CD keys?

Allkeyshop.com compares the cheapest prices of Dungeons 2 on the digital downloads market to find the best sales and discount codes on trusted stores.

Dungeons 2, the sequel to Dungeons released in 2011, is a strategy/simulation game developed by Realmforge Studios and published by Kalypso Media.

The Dungeon Lord is making a comeback, and he’s out to fulfill his insatiable quest for vengeance by means of recruiting new monsters from the underworld. Not only that, the Dungeon Lord also wants to extend his dominion over humans and make an attempt to conquer the human world, too!

The single player campaign features 2 playable factions with 26 unique creatures, multiple hero types and game modes. You get to experience 2 unique gameplays depending on where you’re located – in the underworld, or the overworld. In the underworld, you get to manage your dungeons by creating networks of dungeons and recruiting an army of fearsome creatures.

On the overworld, you get to defend your Kingdom from heroes, and wage war against their cities – here is where your tactical skills will be tested. Having problems with your minions? The Hand of Terror is there to help you control them and give out commands. Tired of playing alone? Dungeons 2 also has a multiplayer mode where you and 3 of your friends can play via LAN or online!

Complete: Dungeons 2 + A Game of Winter DLC + A Chance of Dragons DLC + A Song of Sand and Fire DLC + A Clash of Pumpkins DLC

GOG.COM CD KEY : You need to register on Gog.com, then use the GOG Key to download and activate your game to play Dungeons 2.
EU STEAM CD KEY: Requires an EUROPEAN IP address or you must activate it with a VPN (Virtual Private Network) in order to play Dungeons 2. Might have languages restrictions or language packs. Read the description on the store game page to know if the EU IP is only needed for activation or for playing also (maybe on EU Servers). Most of the stores offer you their help, or show you how to do this with a tutorial to follow.
STEAM GIFT : A Steam gift is a one-time transfer you receive. You activate and install Dungeons 2 to play on Steam, it is a non-refundable game that stays in your Steam games collection. Please read the store description about any language or region restrictions.
STEAM CD KEY : Use the Steam Key Code on Steam Platform to download and play Dungeons 2. You must login to your Steam Account or create one for free. Download the (Steam Client HERE). Then once you login, click Add a Game (located in the bottom Left corner) -> Activate a Product on Steam. There type in your CD Key and the game will be activated and added to your Steam account game library.
STEAM KEY ROW : It means for Rest Of the World countries which are not concerned by the region restrictions. This product can't be purchased and activated in Several countries. Please read the store description to know the full list of countries which are concerned. Use the key to Download and play Dungeons 2 on Steam.
Bundle
Complete Edition
Standard Edition

The Wolfestein series is great; so I thing this one will be a must have for all the fans!

Another game for the dungeons saga …. if you fancy

I am up for playing this a bit if I got it! Looks nice according to the gameplay 🙂