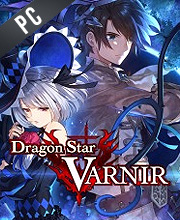 It's a digital key that allows you to download Dragon Star Varnir directly to PC from the official Platforms.

How can I find the best prices for Dragon Star Varnir CD keys?

Allkeyshop.com compares the cheapest prices of Dragon Star Varnir on the digital downloads market to find the best sales and discount codes on trusted stores.

Play as the knight named Zelphy who is part of an order that is tasked to bring down the cursed beings that give birth to dragons called witches. However, in an interesting twist of fate, he is saved by two witches when he is almost killed in a mission. To save his life though, he had to drink dragon blood. This, in turn, gave him new abilities as well as an intertwined fate with his saviors. He will join the witches against the Empire who would want to destroy their kind.

Offering a classic turn-based battle system with three vertically oriented tiers. You must strategically place your party members to maximize their strengths and as much as possible hide their weaknesses.

During battles, fill up your Dragon Guage to awaken your inner dragon, this will allow you to transform as well as use the power of the dragon inside you. Fill up your different dragon skill trees to give you better chances for victory.

Every decision that you make in the game will ultimately change the ending, so choose wisely.

EU STEAM CD KEY: Requires an EUROPEAN IP address or you must activate it with a VPN (Virtual Private Network) in order to play Dragon Star Varnir. Might have languages restrictions or language packs. Read the description on the store game page to know if the EU IP is only needed for activation or for playing also (maybe on EU Servers). Most of the stores offer you their help, or show you how to do this with a tutorial to follow.
STEAM CD KEY : Use the Steam Key Code on Steam Platform to download and play Dragon Star Varnir. You must login to your Steam Account or create one for free. Download the (Steam Client HERE). Then once you login, click Add a Game (located in the bottom Left corner) -> Activate a Product on Steam. There type in your CD Key and the game will be activated and added to your Steam account game library.
Bundle
Complete Pack
Deluxe Edition
Standard Edition