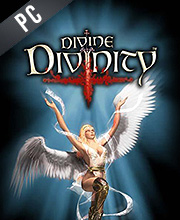 What is Divine Divinity CD key?

It's a digital key that allows you to download Divine Divinity directly to PC from the official Platforms.

How can I find the best prices for Divine Divinity CD keys?

Allkeyshop.com compares the cheapest prices of Divine Divinity on the digital downloads market to find the best sales and discount codes on trusted stores.

Divine Divinity is a role-playing game developed and published by Larian Studios. The game features a hack-and-slash action type of gameplay, a huge world waiting to be explored, and thousands of items to investigate, trade, and use. It has a couple of spin-offs (Beyond Divinity and Divinity Dragon Commander), a sequel (Divinity 2), and a prequel (Divinity Original Sin).

You will play the role of the Chosen One, who has the task of uniting the seven races of Rivellon, and become the Divine One in order to stop the birth of the Lord of Chaos. Under the guidance of the wizard Zandalor, your goal is to unleash the Divinity in you by developing your character in a variety of ways, as well as fighting off enemies, and solving numerous non-linear quests along the way.

The game features a classless character development system which lets you decide the kind of character you want to be. Each character (warrior, wizard, survivor) has his own unique ability as well as 96 skills which you can choose from regardless of what your class is. It also employs a unique fast-paced hack and slash combat system which also allows you to pause the game at will and survey the battlefield ahead of you. With tons of objects and items in the game, you can go ahead and investigate, trade, use and combine them all you want to create advanced items. With an award-winning soundtrack as an addition, Divine Divinity is one that will keep you playing for hundreds of hours.

Zoom 1m 3m 1y All
Track product
GOG.COM CD KEY : You need to register on Gog.com, then use the GOG Key to download and activate your game to play Divine Divinity.
PUBLISHER WEBSITE CD KEY: Use the CD Key Code to download directly on the Official Website or from the store to play Divine Divinity. Follow the instructions given by the store. Verify languages available and possible region restrictions before buying.
EU STEAM CD KEY: Requires an EUROPEAN IP address or you must activate it with a VPN (Virtual Private Network) in order to play Divine Divinity. Might have languages restrictions or language packs. Read the description on the store game page to know if the EU IP is only needed for activation or for playing also (maybe on EU Servers). Most of the stores offer you their help, or show you how to do this with a tutorial to follow.
STEAM CD KEY : Use the Steam Key Code on Steam Platform to download and play Divine Divinity. You must login to your Steam Account or create one for free. Download the (Steam Client HERE). Then once you login, click Add a Game (located in the bottom Left corner) -> Activate a Product on Steam. There type in your CD Key and the game will be activated and added to your Steam account game library.
Standard Edition
Compare Choose & Buy Download (743)