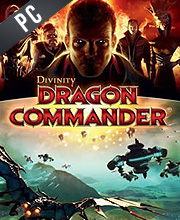 It's a digital key that allows you to download Divinity Dragon Commander directly to PC from the official Platforms.

How can I find the best prices for Divinity Dragon Commander CD keys?

Allkeyshop.com compares the cheapest prices of Divinity Dragon Commander on the digital downloads market to find the best sales and discount codes on trusted stores.

You will play as a Dragon Commander and you only have one mission: reunite a broken empire and become its new emperor. The road to success is not easy, though, as it depends on how you rule your new empire, build invincible armies, and lead them to victory.

Divinity Dragon Commander features a turn-based campaign blended with real-time strategy and role-playing. Full 3D RTS battles await you on vast landscapes full of enemies on land, sea, and air. Deploy your units, build factories, gather resources, construct armies and more to ensure your victory. There will also be times when your units may need your help.

Support them by turning yourself into a dragon and support them in combat. As the dragon your skills include breathing fire (to destroy), casting fog (to confuse), and using charm (to subvert). Plan ahead and play your cards right in order to emerge victorious in your battle for unification and domination!

The game can be played in single player as well as on multiplayer and co-op modes via LAN, or online.

Get ready to lead your army to victory with Divinity Dragon Commander!

GOG.COM CD KEY : You need to register on Gog.com, then use the GOG Key to download and activate your game to play Divinity Dragon Commander.
PUBLISHER WEBSITE CD KEY: Use the CD Key Code to download directly on the Official Website or from the store to play Divinity Dragon Commander. Follow the instructions given by the store. Verify languages available and possible region restrictions before buying.
STEAM GIFT : A Steam gift is a one-time transfer you receive. You activate and install Divinity Dragon Commander to play on Steam, it is a non-refundable game that stays in your Steam games collection. Please read the store description about any language or region restrictions.
STEAM CD KEY : Use the Steam Key Code on Steam Platform to download and play Divinity Dragon Commander. You must login to your Steam Account or create one for free. Download the (Steam Client HERE). Then once you login, click Add a Game (located in the bottom Left corner) -> Activate a Product on Steam. There type in your CD Key and the game will be activated and added to your Steam account game library.
Imperial Edition
Pack X4
Standard Edition
Compare Choose & Buy Download (710)

The strategy part of the game is fine, but what really makes the game in my opinion is the story and the choices you make there. In what other game can you marry an undead, give them a human body only for you to sacrifice them to a demon after?