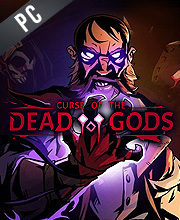 What is Curse of the Dead Gods CD key?

It's a digital key that allows you to download Curse of the Dead Gods directly to PC from the official Platforms.

How can I find the best prices for Curse of the Dead Gods CD keys?

Allkeyshop.com compares the cheapest prices of Curse of the Dead Gods on the digital downloads market to find the best sales and discount codes on trusted stores.

Curse of the Dead Gods is an action–adventure video game that is developed by Passtech Games and published by Focus Home Interactive.

Your greed will be the death of you! You enter a cursed temple looking for riches, divine powers and eternal life. The temple, however, is a labyrinth with bottomless pits, traps, and monsters.

You have to be ready to battle against hordes of enemies and malignant deities. There are also fire-spewing statues, hidden spikes, explosives, and other traps that can surely kill you.

There will be a huge arsenal of weapons to use as well as mystical relics that will help you in your journey. As you travel deeper, corruption will build-up, it is up to you if you would want to accept it or ignore it.

Offering a skill-based roguelike game that lets you explore an endless dark temple. There are different types of weapons to use like swords, spears, bows, guns and more. There are different curses that you will be afflicted with, putting a twist on your every action. Battle against a lot of enemies, deadly bosses and powerful champions.

STEAM CD KEY : Use the Steam Key Code on Steam Platform to download and play Curse of the Dead Gods. You must login to your Steam Account or create one for free. Download the (Steam Client HERE). Then once you login, click Add a Game (located in the bottom Left corner) -> Activate a Product on Steam. There type in your CD Key and the game will be activated and added to your Steam account game library.
EU STEAM CD KEY: Requires an EUROPEAN IP address or you must activate it with a VPN (Virtual Private Network) in order to play Curse of the Dead Gods. Might have languages restrictions or language packs. Read the description on the store game page to know if the EU IP is only needed for activation or for playing also (maybe on EU Servers). Most of the stores offer you their help, or show you how to do this with a tutorial to follow.
EUROPEAN STEAM GIFT : It’s a steam gift for Europe which requires an European IP address to activate and to play Curse of the Dead Gods on Steam. Read carefully the store description about region and language restrictions.
STEAM GIFT : A Steam gift is a one-time transfer you receive. You activate and install Curse of the Dead Gods to play on Steam, it is a non-refundable game that stays in your Steam games collection. Please read the store description about any language or region restrictions.
Early Access CD Key. Play before the release date.

Be the first one to write a review about Curse of the Dead Gods !