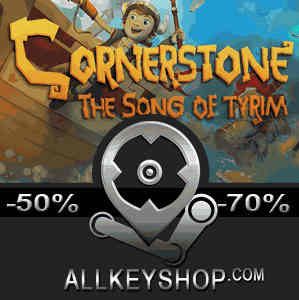 What is Cornerstone The Song of Tyrim CD key?

It's a digital key that allows you to download Cornerstone The Song of Tyrim directly to PC from the official Platforms.

How can I find the best prices for Cornerstone The Song of Tyrim CD keys?

Allkeyshop.com compares the cheapest prices of Cornerstone The Song of Tyrim on the digital downloads market to find the best sales and discount codes on trusted stores.

Cornerstone: The Song of Tyrim is an action, adventure, role-playing, puzzle solving videogame. Developed by Overflow Games and published by Phoenix Online Publishing.

Play as the young Tyrim as he sets forth to look for the missing Viking men of Borja Village. The Viking men have been missing for weeks and nobody knows why or how. Tyrim’s determination is all he has as well as his great crafting and combat skills to bring with him in his journey. The world of Nygard awaits, set sail on the Mad Goat and discover what mysteries lay hidden.

Bring home ancient relics and discover some forbidden secrets and magic and most importantly, bring home the lost Viking men of your village.

Cornerstone: The Song of Tyrim is a mix of an open-word and action RPG as well as blend of physics-based puzzles. You will also be introduced to a great crafting system for your weapons, armor and gear.

You will definitely get the adventure of a lifetime with Cornerstone: The Song of Tyrim.

Zoom 1m 3m 1y All
Track product
GOG.COM CD KEY : You need to register on Gog.com, then use the GOG Key to download and activate your game to play Cornerstone The Song of Tyrim.
STEAM CD KEY : Use the Steam Key Code on Steam Platform to download and play Cornerstone The Song of Tyrim. You must login to your Steam Account or create one for free. Download the (Steam Client HERE). Then once you login, click Add a Game (located in the bottom Left corner) -> Activate a Product on Steam. There type in your CD Key and the game will be activated and added to your Steam account game library.
Standard Edition
Compare Choose & Buy Download (743)

its a nice come , combining alot of elements and good gameplay

In this episode of First Impressions, I take a look at a game that tries to combine aspects of Dark Souls with the stylization of LoZ: Wind Waker. Will it work? Will it not? Will I be able to physics a barrel into love submission? Probably not. Let’s check it out together!