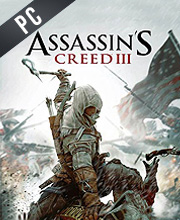 What is Assassin's Creed 3 CD key?

It's a digital key that allows you to download Assassin's Creed 3 directly to PC from the official Platforms.

How can I find the best prices for Assassin's Creed 3 CD keys?

Allkeyshop.com compares the cheapest prices of Assassin's Creed 3 on the digital downloads market to find the best sales and discount codes on trusted stores.

The game’s plot takes place in a fictional history of real world events, and the story revolves around the centuries-old struggle between Assassins and the Templars.

Set in the 21st century, you will play as Desmond Miles, a Native American assassin who’s on a journey to relive his ancestor’s memories through the help of a machine known as the Animus, as well as find a way to avert the apocalypse in the year 2012. As a Native American assassin, use your weapons to your advantage and kill enemies with a wide array of guns, bows, tomahawks, and many more!

Assassin’s Creed 3 features a stunning version of the United States during the American Revolution. With the power of the Ubisoft-AnvilNext game engine, you will get to enjoy more powerful graphics, life-like animations, more immersive combat, and advanced physics.

Zoom 1m 3m 1y All
Track product
RETAIL CD KEY : No download will be provided! For a Retail CD Key you need to own the physical support (or files) of the game. Register the game with your CD key during the installation.
EU STEAM CD KEY: Requires an EUROPEAN IP address or you must activate it with a VPN (Virtual Private Network) in order to play Assassin's Creed 3. Might have languages restrictions or language packs. Read the description on the store game page to know if the EU IP is only needed for activation or for playing also (maybe on EU Servers). Most of the stores offer you their help, or show you how to do this with a tutorial to follow.
STEAM GIFT : A Steam gift is a one-time transfer you receive. You activate and install Assassin's Creed 3 to play on Steam, it is a non-refundable game that stays in your Steam games collection. Please read the store description about any language or region restrictions.
STEAM CD KEY : Use the Steam Key Code on Steam Platform to download and play Assassin's Creed 3. You must login to your Steam Account or create one for free. Download the (Steam Client HERE). Then once you login, click Add a Game (located in the bottom Left corner) -> Activate a Product on Steam. There type in your CD Key and the game will be activated and added to your Steam account game library.
EUROPEAN Ubisoft Connect CD KEY : Ubisoft Connect CD Key for EUROPE. You need an European IP and the Ubisoft Connect Software in order to download and play Assassin's Creed 3. Please read carefully the description on the store for more information about languages and restrictions. Sometimes a language pack can be installed to play in other languages.
Ubisoft Connect CD KEY : Ubisoft Connect Digital Code to download and play Assassin's Creed 3. You need to install the (Ubisoft Connect Software HERE), then simply add the CD Key on Ubisoft Connect to download the game.
Bundle
Deluxe Edition
Remastered Edition
Special Edition
Standard Edition
Compare Choose & Buy Download (791)

Very good price for the special edition of this magnificent title from the great AC series!

It has a few bugs and a very slow opening but AC3 is a pretty solid game. HRK is a good store to buy it.

This game gave me a true Assassin’s creed experience. I loved tomahawk… those effects with guns and blades were perfect…. Perfect game.