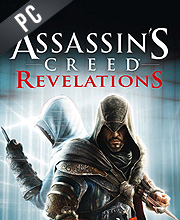 It's a digital key that allows you to download Assassin’s Creed Revelations directly to PC from the official Platforms.

How can I find the best prices for Assassin’s Creed Revelations CD keys?

Allkeyshop.com compares the cheapest prices of Assassin’s Creed Revelations on the digital downloads market to find the best sales and discount codes on trusted stores.

Assassin’s Creed: Revelations is an action–adventure open world stealth video game available in multiplayer and single-player mode. It was developed by Ubisoft Montreal and published by Ubisoft. The game is the fourth major installment in the Assassin’s Creed series.

The game follows the series’ standard open world gameplay in the Ezio and Altair Sequences. New gameplay features were added in the game which can be used to move around the area or use to defeat enemy opponents. Some of the features can also be used to make combo attacks. New equipment, such as bomb variations are also made available in the game compared to the other sequels. New sequences were added, but these sequences can only be played by collecting Data Fragments hidden throughout Constantinople.

Another feature added are the seizing districts of the city from the Templars. Though similar from the previous sequel, these new feature will send more reinforcements to recapture the districts. Ezio must defend the district by using a “Tower defense” mini game, where Ezio controls a group of assassins from rooftop against several wave of Templar soldiers and siege weapons.

A Multiplayer mode is made available which expands the basics of online game mode. the Assassin’s Creed: Revelations comes with new characters and locations. The game players can customized their game character’s appearance according to their choice.

The last and imo the best episode of the Enzio Saga

This is very good game. Ezio trilogy was so awesome and good to play and I’d like to recommend it to everyone.

how bad that it’s the last chapter of Ezio :/

really nice game with nice story line, you should get it if you didn’t already !