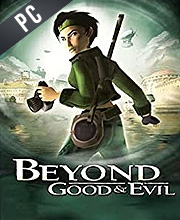 What is Beyond Good and Evil CD key?

It's a digital key that allows you to download Beyond Good and Evil directly to PC from the official Platforms.

How can I find the best prices for Beyond Good and Evil CD keys?

Allkeyshop.com compares the cheapest prices of Beyond Good and Evil on the digital downloads market to find the best sales and discount codes on trusted stores.

For 20 years now the planet Hillys has been in constant war with an alien race called the DomZ, they bombard the planet with meteors every so often. Jade and his adoptive uncle Peyj are starting to become weary of the Alpha section inaction, and so jade and her uncle set out to capture the truth about what’s really happening on Hillys armed only with her camera and Dai jo-staff.

Ubisoft has done it again, first with Prince of Persia: Sands of Time and now this. Beyond Good & Evil is a highly polished game that covers so many genres and styles of gameplay that it can hardly be classified. Beyond Good & Evil has become one of my favorite action-adventure games of all time, first on the console and now the PC.

The criticism/minus point about this game is its length or lack thereof, it is very short. I beat it in a weekend and the lack of replay value kind of hurts the game a little. This is to be expected since the game is a great story that is worth playing through at least twice, of course when a game is this good, you always want more. Wonderfully done and one of the surprise games of last year in my opinion.

not a popular masterpiece. Owned cd version of this game when i was like 10 years old played it like 50+ times by now and i still love it. Cant wait for Beyond Good And Evil 2 to fully release

good game just try it and you will love it