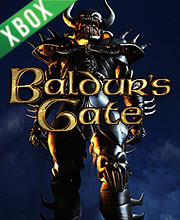 It's a digital key that allows you to download Baldur´s Gate directly to Xbox One from Xbox Live.

How can I find the best prices for Baldur´s Gate on Xbox one?

Baldur´s Gate is a series of RPG‘s developed by BioWare and published by Black Isle Studios. Baldur´s Gate inspired the development of two series, namely the Bhaalspawn Saga and the Dark Alliance; both of which were set in the Forgotten Realms Dungeons & Dragons campaign era within the Western Heartlands.

Both the Dark Alliance series and the Bhaalspawn Saga were very well received which led to them being awarded critical acclamation and impressive commercial success. Bhaalspawn Saga, in particular, was celebrated for its real-time gameplay which revitalized the computer role-playing game (CRPG) genre. Baldur´s Gate is available for the Xbox One.