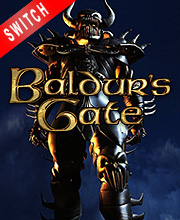 It's a digital key that allows you to download Baldur´s Gate directly to Nintendo Switch directly from Nintendo eShop.

How can I find the best prices for Baldur´s Gate on Nintendo Switch ?

Baldur´s Gate is a series of role-playing video games that were developed by BioWare and published by Black Isle Studios. The game sparked the development of two series, known as the Bhaalspawn Saga and the Dark Alliance; both of which were set in the Forgotten Realms Dungeons & Dragons campaign era and takes place within the Western Heartlands.

The Dark Alliance series garnered critical and commercial success. The Bhaalspawn Saga also got its fair share of success as it was critically acclaimed for using pausable real-time gameplay, which is credited with revitalizing the computer role-playing game (CRPG) genre. Baldur´s Gate is available for the Nintendo Switch.

BOX GAME : This is Baldur´s Gate Nintendo Switch Box Edition (DVD-CD ROM). This is not a downloadable product. Please read the sellers page for any additional costs (taxes, shipping), delivery time for your country and languages available.
NINTENDO CODE : This is a digital code for Baldur´s Gate Nintendo Switch. Use the download code on the Nintendo eShop of your Console. Once connected to the Nintendo eShop, you can enter and redeem the Download Code. Read carefully the store description about any language and region restrictions.
Enhanced Edition