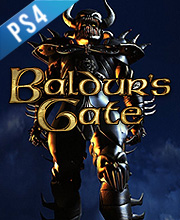 It's a digital key that allows you to download Baldur´s Gate directly to Playstation 4 directly from PSN (Playstation network).

Baldur´s Gate is a series of role-playing games developed by BioWare and published by Black Isle Studios. Baldur´s Gate led to the development of two series, namely the Bhaalspawn Saga and the Dark Alliance; both of which were set in the Forgotten Realms Dungeons & Dragons campaign era within the Western Heartlands.

The Dark Alliance series received much critical and commercial success much like the Bhaalspawn Saga which received critical acclamation for its pausable real-time gameplay. It did so well that it was cheered as for revitalizing the computer role-playing game (CRPG) genre. Baldur´s Gate is available for the PlayStation 4.

Be the first one to write a review about Baldur´s Gate !