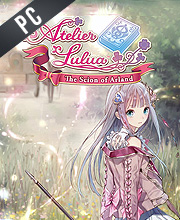 What is Atelier Lulua The Scion of Arland CD key?

It's a digital key that allows you to download Atelier Lulua The Scion of Arland directly to PC from the official Platforms.

How can I find the best prices for Atelier Lulua The Scion of Arland CD keys?

Allkeyshop.com compares the cheapest prices of Atelier Lulua The Scion of Arland on the digital downloads market to find the best sales and discount codes on trusted stores.

Atelier Lulua The Scion of Arland is a role-playing video game that is developed and published by KOEI TECMO Games Co. Ltd. This is the 4th installment of the Arland series.

Welcome back to the nostalgic world of Arland where you get to play as a young girl named Lulua. Lulua is actually the daughter of Rorona from the game’s first installment Atelier Rorona.

Lulua would one day want to be greater than her legendary mother in the world of alchemy. She will not have to do this alone as she will have some companions that will help her through.

Since this is the fourth installment, from Atelier Rorona, Atelier Totori, Atelier Meruru. This newest title will show how the characters and the different locations were able to change over time.

Offering a system that is almost the same but has continually evolved. There will be synthesis, exploration and battle. All these elements blended together give players an entirely new gaming experience.

EUROPEAN STEAM GIFT : It’s a steam gift for Europe which requires an European IP address to activate and to play Atelier Lulua The Scion of Arland on Steam. Read carefully the store description about region and language restrictions.
STEAM GIFT : A Steam gift is a one-time transfer you receive. You activate and install Atelier Lulua The Scion of Arland to play on Steam, it is a non-refundable game that stays in your Steam games collection. Please read the store description about any language or region restrictions.
STEAM CD KEY : Use the Steam Key Code on Steam Platform to download and play Atelier Lulua The Scion of Arland. You must login to your Steam Account or create one for free. Download the (Steam Client HERE). Then once you login, click Add a Game (located in the bottom Left corner) -> Activate a Product on Steam. There type in your CD Key and the game will be activated and added to your Steam account game library.
Deluxe Edition
Standard Edition
Compare Choose & Buy Download (710)