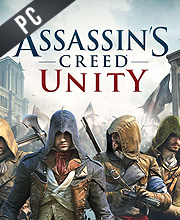 It's a digital key that allows you to download Assassins Creed Unity directly to PC from the official Platforms.

How can I find the best prices for Assassins Creed Unity CD keys?

Allkeyshop.com compares the cheapest prices of Assassins Creed Unity on the digital downloads market to find the best sales and discount codes on trusted stores.

Assassin’s Creed Unity is an action/adventure game developed by Ubisoft Montréal and edited by Ubisoft.

Embark on a journey through time with Assassins Creed Unity! The year is 1789, and the French Revolution has turned Paris into a place where terror and chaos loom. Follow the journey of Arno Dorian as he tries to expose those behind the Revolution and eventually become a true Master Assassin.

Assassin’s Creed Unity features a third-person open world environment with revamped combat, parkour, and stealth systems. With full motion control, your parkour experience is more fluid, allowing you to freely run up and down city walls. The reinvented fighting system also gives a richer combat experience based on your timing, skill, and flow. The new stealth mode is also a plus and includes a new cover system and crown manipulation techniques.

A co-op multiplayer is also introduced in the game which will allow up to four players to engage in narrative missions ranging from heists to assassinations, as well as explore its open-world map. As Arno, you will also be equipped with a range of new weapons which includes the Phantom Blade (a hidden blade with crossbow capabilities).

All in all, Assassin’s Creed Unity is definitely a game packed not only with awesome content, but also with additional features that will surely satisfy your game cravings.

hmm the unity is a good one it has such an amazing romantic story that i cried at the end but i bought it in a very low price it was like a 60-70 % discount compared from uplay and i think i bought it from cdkeys.com or instant gaming i dont remember that much but i remember that it was the lowest price here at allkeyshop website

I don’t understand why so many people hated Unity. Not my fav in the series but still really good imo.﻿

The game is ok, some bug and glitches! Fine for this price.