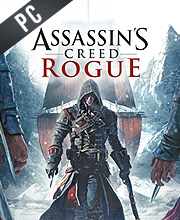 It's a digital key that allows you to download Assassin's Creed Rogue directly to PC from the official Platforms.

How can I find the best prices for Assassin's Creed Rogue CD keys?

Allkeyshop.com compares the cheapest prices of Assassin's Creed Rogue on the digital downloads market to find the best sales and discount codes on trusted stores.

As Shay Patrick Cormac, explore the wilds of the Hudson River Valley, colonial New York, and the frigid arctic waters of the North Atlantic aboard the Morrigan. Uncover the plots and intrigue that led to Shay turning his back on the Assassins and his ultimate induction into the Templars, becoming the greatest assassin hunter of all time.

During the search for an artifact said to reveal the locations of several Pieces of Eden, Shay begins to question the actions and motives of the Assassins, finding them responsible for causing major catastrophes across the world. Shay decides to deny Assassins the information to continue their havoc and in return is shot by one of the brotherhood he used to hold so dear.

Upon rescue and recovery, Shay lends aid to the British army in New York against the French and is formally inducted into the the Templar during an attack on the British. Shay’s decision to seek out the locations of the remaining artifact causes events to lead the eventual downfall of the Assassins. With the additional end of the Templars’ influence in America, we are left to question the eventual rise of a new revolution.

While game mechanics form the previous Assassin’s Creed games have been incorporated, players get to enjoy new features both on land and aboard the Morrigan in thrilling naval combat and new environmental hazzards. Familiar faces have also been brought back such as Acchilles Davenport and Haythem Kenway from Assassian’s Creed III and Black Flag’s Adewale.

What discoveries and choices do we discover that lead to the downfall of such powerfull societies, and what effects could their revelation eventually lead to in present times? What choices will you make when given the option to join the Templars or die? Find out in Assassin’s Creed: Rogue!

Finally got this AC games on Gamesplanet via won gift card, thank you Allkeyshop for all giveaways.

A good Assassin’s Creed game. If you liked Black Flag you will love Rogue

I love the ac saga, but really i prefer the first and the second one

love the AC series! ACU was a bit of a dissapointment, but for this one the reviews are looking good! Get it if you can
Thanks allkeyshop for another hreat game !