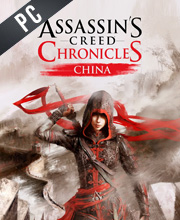 It's a digital key that allows you to download Assassins Creed Chronicles China directly to PC from the official Platforms.

How can I find the best prices for Assassins Creed Chronicles China CD keys?

Allkeyshop.com compares the cheapest prices of Assassins Creed Chronicles China on the digital downloads market to find the best sales and discount codes on trusted stores.

The games in the Chronicles series feature new protagonists, and a 2.5D world inspired by traditional brush paintings.

Assassin’s Creed Chronicles: China features Shao Jun, the last remaining Assassin of the Chinese Brotherhood, and the story is set in the year 1526 in China.

Shao Jun returns to her homeland after being trained by the legendary Italian assassin Ezio Auditore da Firenze to seek revenge against the Eight Tigers, the Templar group who wiped out the Chinese Brotherhood. Follow Shao Jun as she travels across China and its legendary landmarks – from the Forbidden City to the Great Wall.

The game also features a new dimension of stealth, and a faster and more fluid “Assault Course” which gives you the freedom of movement an assassin should possess. Shao Jun is also armed with powerful weapons in her arsenal, from a Kian Sword to her unique hidden shoe blade.

You also get to enjoy the game more as it also features different paths according to your needs whether opening new pathways, completing side missions, or grabbing hidden collectibles – take the quickest path to your target!

Title itself sounds really interesting, hope this game is a good one!

Definitely would love to see an adventure like we’re used to see in other Assassin’s Creed in an open world in China and Japan.
Would be the best Game 😀

I have mixed feeling about this one, I’ll give it a try!

Assassin’s Game in 2D like old mobile games but in a better quality and on PC ? Tottaly worth the purchase.