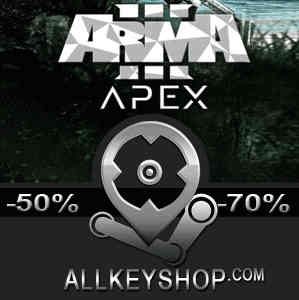 What is Arma 3 Apex CD key?

It's a digital key that allows you to download Arma 3 Apex directly to PC from the official Platforms.

How can I find the best prices for Arma 3 Apex CD keys?

Allkeyshop.com compares the cheapest prices of Arma 3 Apex on the digital downloads market to find the best sales and discount codes on trusted stores.

Arma 3 Apex is an action, simulation, strategy video game developed and published by Bohemia Interactive. This is a downloadable content for Arma 3 and would need the base game to play it.

Arma 3 Apex will bring you to the beautiful tropical island of Tanoa. This island is a part of a cluster of islands called the Horizon Islands. A grim history holds this location which is full of conflict and turmoil as evidenced by the artifacts seen across the island.

However, that has been the past, now Tanoa enjoys freedom and a good economy made up of rich deposits of rare earth metals that they export all over the world. The year is now 2035, the island has been enjoying its time of peace and it has been a very long time since their dark past. But the uneasy situation of the world’s stage is threatening to bring darkness to the island once again.

The game offers a co-op campaign with a theme of near-future combat. Bringing you new vehicles, weapons and characters. The new vehicles that you will encounter will include Light Strike vehicles as well as VTOL aircrafts.

(Can be different or change over time for each seller. Please refer to the seller’s website.)

EU STEAM CD KEY: Requires an EUROPEAN IP address or you must activate it with a VPN (Virtual Private Network) in order to play Arma 3 Apex. Might have languages restrictions or language packs. Read the description on the store game page to know if the EU IP is only needed for activation or for playing also (maybe on EU Servers). Most of the stores offer you their help, or show you how to do this with a tutorial to follow.
EUROPEAN STEAM GIFT : It’s a steam gift for Europe which requires an European IP address to activate and to play Arma 3 Apex on Steam. Read carefully the store description about region and language restrictions.
STEAM GIFT : A Steam gift is a one-time transfer you receive. You activate and install Arma 3 Apex to play on Steam, it is a non-refundable game that stays in your Steam games collection. Please read the store description about any language or region restrictions.
STEAM CD KEY : Use the Steam Key Code on Steam Platform to download and play Arma 3 Apex. You must login to your Steam Account or create one for free. Download the (Steam Client HERE). Then once you login, click Add a Game (located in the bottom Left corner) -> Activate a Product on Steam. There type in your CD Key and the game will be activated and added to your Steam account game library.
DLC
Standard Edition

this must be my next purchase! great to have a change from csgo

very beautifull game realistic and rich of suspence, the war simulator number one on the market.

A fantastic game, beautiful and one of the best shooting games and has a very nice graphics