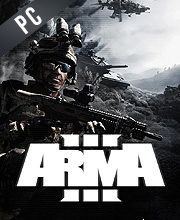 It's a digital key that allows you to download Arma 3 directly to PC from the official Platforms.

How can I find the best prices for Arma 3 CD keys?

Allkeyshop.com compares the cheapest prices of Arma 3 on the digital downloads market to find the best sales and discount codes on trusted stores.

Jump into PC’s premier military game with a wealth of singleplayer and multiplayer content and near-limitless possibilities for content creation.

A significant step forward for the king of military simulation offset by inconsistent graphical performance.

Now with its campaign fully in place, Arma 3 is a spectacular and fiendishly challenging military simulator in both solo and multiplayer.

The Apex Edition bundles the base game with the Apex DLC, a massive expansion that adds a wealth of new content as well as a new singleplayer campaign, a new co-op campaign, and end-game multiplayer. This edition also comes with the Karts, Helicopters and Marksmen DLC packs.

The Ultimate Edition bundles the base game with 2 massive expansions and 7 DLC packs for the ultimate ARMA 3 experience.

Apex is a full expansion that adds a wealth of new content for players to enjoy.

Jets is a DLC pack that adds 4 distinct combat aircraft and a new Showcase scenario to the game.

Helicopters is a DLC pack that adds 2 helicopters and new scenarios to the game.

Find all the best prices for Arma 3 DLCs on Allkeyshop!

Be the first one to write a review about Arma 3 !

An immersive and realistic experience perfect for those that are tired of the typical “aim and shoot” type of first-person shooters. It delivers an experience like no other, realistic tactics and scenarios leave the player awed at the level of detail this game has to offer. You’ll find yourself losing hours playing and setting up scenarios to play solo or with friends in a multiplayer game with varying degrees of realism. The flight and vehicle mechanics might not be the most accurate but it definitely makes it easy for a beginner to learn and get used to the controls.

Classic fps shooter, this game’s storyline and amazing graphics are worth buying giving you hours and hours of fun content.

if you like realism, sandbox games and infinite amount of mods. this is the game for you. youll play hundreds if not thousands of hours guaranteed.