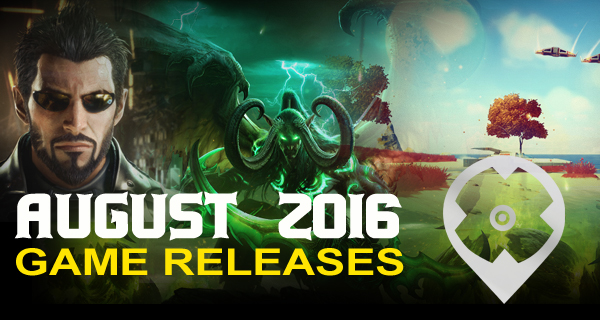 Brace yourselves for these awesome August 2016 game releases!

Are you excited for the new month? Well, these August 2016 game releases will surely hit your excitement button.

These 11 games will surely be a great addition to your game library. Coming this August are much-awaited titles such as No Man’s Sky, Deus Ex Mankind Divided, and World of Warcraft Legion. There’s also an upcoming Batman game courtesy of the guys from Telltale Games. This year’s edition of the popular racing outfit F1 is also going to be released. You’ll get to know more about other games as you scroll down to our list below.

Which of these games are you looking out for? Do tell us in the comments below!

What’s Hot? The comic book version of the Batman you came to love now comes alive through Telltale Game’s episodic storytelling. Of course, as this is a Telltale Games creation, expect your decision-making to be put to the test.

What’s Hot? 18 quintillion planets are waiting for you to be discovered and explored in No Man’s Sky! And with it being set in a limitless universe, you won’t encounter any loading screens!

What’s Hot? This story-driven episodic adventure game features classical 3D adventures with a unique story. The story will be affected by the dialogue and actions you choose.

Release  Date: 19 August 2016 What’s Hot? F1 2016 allows you to create your own legend in its Career Mode. You can select your own avatar, choose which team you want to be on, and many more exciting features!

What’s Hot? The latest Worms game is back, now more destructive and more awesome than ever! Enjoy 30 campaign levels set in 2D art style. PLUS! New vehicles, weapons, and so much more!

What’s Hot? You’ll get to play the game both in first-person and third-person perspective. It also combines FPS and role-playing elements into its gameplay.

Of Kings and Men

Release  Date: 25 August 2016 What’s Hot? If you’re a fan of Medieval warfare, then Of Kings and Men is for you. This game is a multiplayer “Persistent Medieval War” game set in the 13th century, and is played in third-person.

What’s Hot? This expansion will raise the level cap to 110. It also includes artifact weapons for each of the classes’ specializations, and a new area in Azeroth, the Broken Isles. It will also introduce the demon hunter class.

What’s Hot? This game is the enhanced version of God Eater 2. “Rage Burst” is the new chapter added to its story. It features six difficulty levels, a new game mechanism called “Blood Rage”, plus new characters, weapon types, and enemies.

Attack on Titan Wings of Freedom

What’s Hot? Based on the manga and anime “Attack on Titan”, get yourself immersed in the game’s story. It is a re-tell of the series’ first season.

What’s Hot? This game combines real-time strategy with action-RPG elements. It is set in a kingdom called Anteria and features five Champions which you can command.